When I’m recommending soundproofing solutions to people, I regularly get asked if a room can be completely soundproofed. I decided to do a bit more research to find a definite answer.

So, can you fully soundproof a room? Yes, a room can be made fully soundproof but it usually means hung walls and suspended floor and ceiling. All of this creates dead air around the room, which stops sound waves from passing in or out of the space. 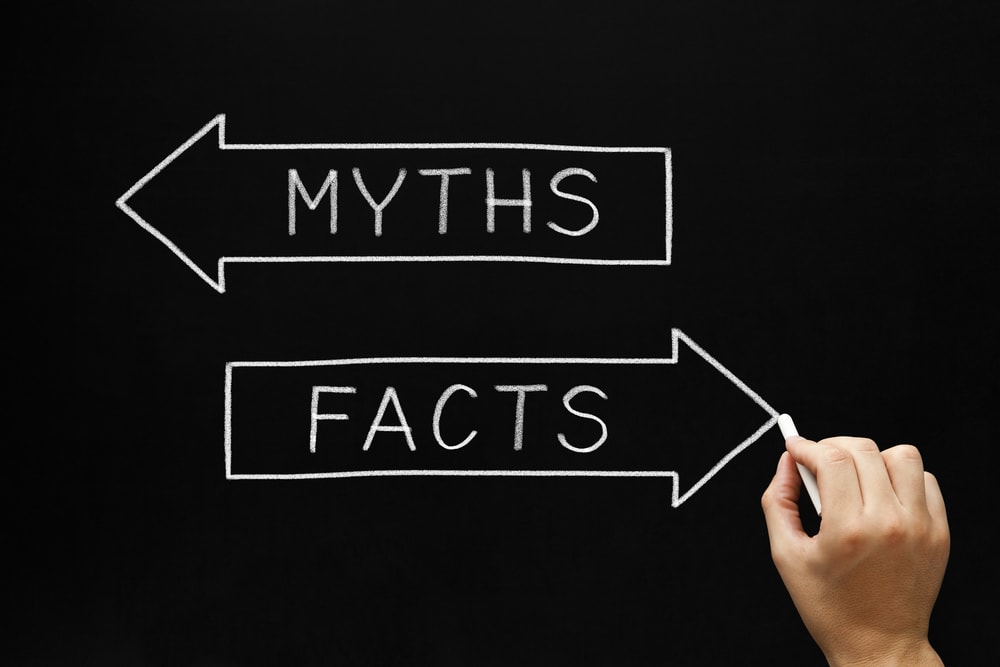 To help you understand whether you can fully soundproof a room in more detail, I decided to look at the facts vs. the myths of soundproofing. Hopefully this will help you get a better understanding of your next soundproofing project!

Can you fully soundproof a room?

Soundproofing a room can be boiled down to the basic fact of blocking noise from entering or exiting a room (RELATED ARTICLE), or both. It’s definitely possible to fully soundproof a room, as this is exactly what they do in recording studios.

After all, recording studios need to be completely free of all noise pollution so that the artists can get the desired track. It wouldn’t be any good if their vocals had audio of the sound technician coughing in the background.

However, to make a room fully soundproof, you need lots of specialist materials and a massive budget. The easiest way to make a room completely soundproof is to build another smaller room within it. Doing this creates a void of dead air between the exterior and interior walls, which blocks sound.

To create this dead air, you need to use methods such as suspended ceilings and floating floors, along with decoupled walls. This would mean building a metal (or wood) frame and then installing the walls, ceiling, and floor. As you can imagine, all of this costs money.

Along with the necessary budget, most people looking to soundproof a room at home won’t have this kind of space. However, if you’ve got the money and the room, then using these methods is a sure-fire way to get the best soundproofing possible.

For those of us that don’t live in mansions, it’s definitely possible to massively reduce the amount of noise pollution entering a room. However, you’re much less likely to get it completely soundproof because you’ll have some weak spots that you just won’t be able to do anything about.

To get the best results at home, your first option should be mass, and plenty of it. This is the easiest way to block sound from the room, and won’t be too hard on your budget either.

On top of that you’ll want to address the weakest areas in the room, which are the doors and windows. I’ve suggested many ways to soundproof doors and windows in other articles, but again, you’ll never get them completely soundproof.

When it comes to soundproofing at home, you’re almost guaranteed to get a fully soundproof room. These cost tens of thousands of dollars and take lots of work, which is why they’re mainly only found in professional settings. However, you can still make a massive difference with the tools at your disposal.

The facts vs. the myths of soundproofing

If you’re new to the world of soundproofing and are considering soundproofing your home, then I definitely recommend it. I did it years ago and haven’t looked back. However, you’ve probably come across plenty of information that seems accurate, but really isn’t.

To give you a hand, here are the most common facts and myths of soundproofing.

I’ve written a massive article on this in which I cover in detail how effective (or rather ineffective foam is on walls, floors and ceilings. Here is the link, go check it out.

Acoustic foam, although regularly seen in soundproof rooms, doesn’t actually do anything for soundproofing. Instead, acoustic foam helps with acoustic treatment, which refers to things like echo and reverberation.

It does this because of its structure, which is quite open and porous. This allows sound waves in but makes it harder for them to reflect off the surface, which essentially blocks echo. For this reason acoustic foam is still a useful addition to your project.

The biggest issue when it comes to floors is impact noise. As the name suggests, this is noise made by an object impacting with a surface, such as feet walking along a floor. Impact noise creates vibrations in the surface, which turns into sound.

Hard floors are obviously much worse for this than carpeted floors, and carpet really does make a difference. This is why most apartments have regulations that prevent people from having hardwood flooring in their apartment.

That said, carpet itself isn’t a great sound dampener. You can expect much better results if you use acoustic underlay, which is designed specifically for blocking sound pollution from impact noise.

If you’re thinking of soundproofing your room, carpet is the best choice for the floor, but don’t forget the underlay too.

I have written another article on this for more details.

This is a question I get asked a lot, or a statement I get told even more. But it’s not true, it’s never been true, and it’ll never be true. Egg boxes do literally nothing for soundproofing in any context.

I can only assume that the reason this connection was made is because egg boxes look a lot like acoustic foam. In fact, acoustic foam is known as having an “egg box” or “egg tray” structure. But that’s where the similarities end I’m afraid.

Egg boxes are cardboard. This means they don’t have much mass, and mass is what you need for soundproofing. Similarly, their composition isn’t right for blocking echo because the cardboard isn’t porous enough.

Egg boxes might do something to reduce echo just through their shape, but I wouldn’t even bother testing this out because it won’t be worth it.

4. Sound absorption and soundproofing are the same thing

While sound absorption methods might be used in a soundproofing project, this doesn’t mean they’re the same thing. Sound absorption is exactly what it sounds like: using sound dampening materials to effectively “soak up” sound waves. This means controlling echo, amplification, and reverberation.

Soundproofing, on the other hand, is the process of blocking sound from entering or exiting a room. You can do this through a variety of methods, including adding mass, decoupling walls, creating dead air, and use sound absorption techniques.

5. Curtains, rugs, and other household items can be used for soundproofing

As I’ve mentioned several times, one of the key principles of soundproofing is adding mass. Technically, blankets and rugs are mass, they’re just not very much of it. Using heavy fabrics is a good way to reduce problems of echo, but they’ll do very little for actual sound blocking.

If you’re looking for a temporary solution or are on an almost non-existent budget, then curtains and rugs can be used as an option for soundproofing. Just bear in mind that they need to be as heavy as possible, and still won’t make that much of a difference.

Instead you should choose a specialist product like mass loaded vinyl or sound dampening mats. These are specially designed to block and absorb sound waves, but will mean spending a bit more money. But the way that I look at is that anything less than the results you want is a waste of money anyway.

Read my guide on soundproofing curtains.

6. Drywall can be used in soundproofing projects

Drywall is one of my go-to materials for a soundproofing project, particularly if I’m working on a budget. It’s cost-effective, easy to source, and is also easy to work with. However, if you can get acoustic grade drywall instead then you’ll have even better results.

While drywall is a pretty easy material to work with, simply throwing up another few layers of it won’t make the biggest difference. Extra drywall should be combined with other options like acoustic foam and sound dampening materials to both block and absorb sound waves.

7. Soundproof paint is worth using when decorating your new room

After my previous explanations of what works in soundproofing, this one should be pretty obvious. How can you expect to get an effective layer of sound blocking mass on a wall using paint? Even if it was lead paint you’d still have a job making a room soundproof.

More than anything, paint is designed to be applied in a thin layer. This is especially true when you think of the range of one-coat paints now available. A single coat of paint would make literally no difference to the sound blocking qualities of a wall.

Even if you applied several coats of paint, you’d be lucky to add an extra millimeter or 2 to the wall. Look at the fact that for concrete to be completely soundproof it needs to be around 20ft thick. Still think that paint is going to do anything?

8. Windows and doors are your worst enemy

Windows and doors are the hardest area of a room to soundproof. After all, their very purpose is to create holes in the room, which of course lets in light, heat, air, and sound.

What’s more, most interior doors are hollow, which makes it even easier for sound to pass through them. Even double-glazed windows let in some noise, but these are by far the best option you’ll have in your home.

It’s possible to soundproof doors and windows to an extent, but it depends on the scope of your project. For example, the most effective soundproof window is essentially 2 thick sheets of Plexiglass with about a foot of dead air between them. More than anything, this just isn’t practical.

You can try options like fitting window boxes or adding mass to your door, but it’s also worth accepting that these are the weakest areas of the room, so you’re often better focusing on the areas where you can make a big difference to noise pollution.

9. Soundproofing should be done by a professional

I’ve never seen any reason why people shouldn’t get stuck in with their own soundproofing projects. Most of the things you can do for effective at-home soundproofing really aren’t too hard with a few tools and a bit of knowledge.

For example, soundproofing a wall can be as simple as attaching more mass, which you could do with a nail gun. However, it could also be as complicated as building an entirely new room.

I recommend watching YouTube videos, planning carefully, and just giving it a go. After all, the worst thing you could really do is mess it up, and almost everything is fixable!

So while it is possible to fully soundproof a room, doing this is usually outside of most people’s means. I’ve found over time that there’s plenty you can do to soundproof a room but you’ll never get the same results. Also, knowing the facts and myths about soundproofing can be a massive help if you’re new to the game.

Thanks for reading! Also check out my recommended products for soundproofing.