Getting started in the world of soundproofing means picking up the jargon pretty quickly. I often find myself having to explain the difference between soundproofing and sound absorption, so I thought it would be helpful to write an article on it. 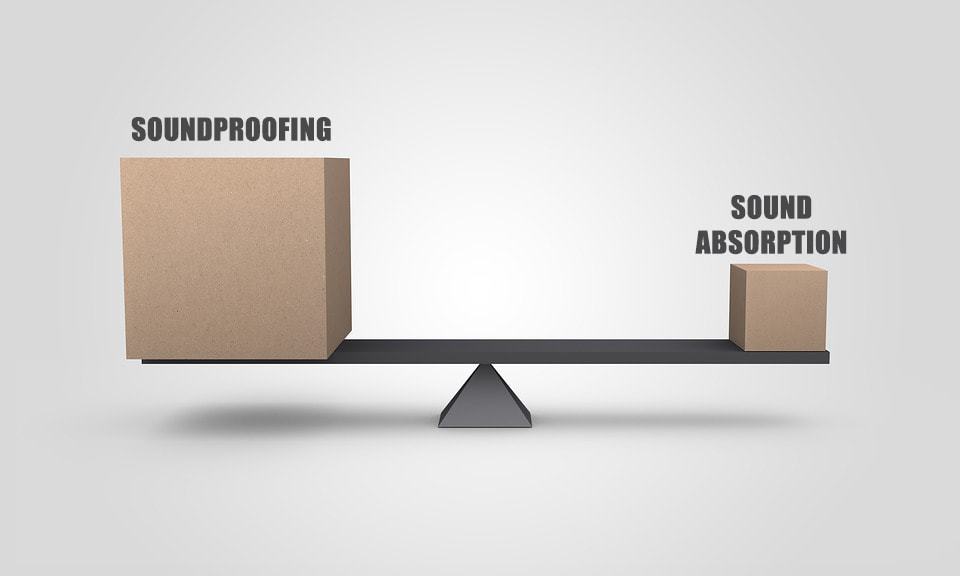 Knowing the difference between these 2 terms will save you a lot of bother in the future and will hopefully stop you from making any mistakes when it comes to your own project.

In this article, I look at the difference between soundproofing and sound absorption, along with some other key terms.

What’s the difference between soundproofing and sound absorption?

These 2 terms are the most frequently used in the soundproofing world, so it’s helpful to have an in-depth understanding of both. This will help you to make educated decisions about which options will benefit you when soundproofing your space.

Soundproofing is defined as the process of blocking noise from either entering or exiting a room. You can do this through a variety of methods, and can block out a range of sounds.

Realistically speaking, you’d employ the same soundproofing techniques for both blocking out your noisy neighbors and building a soundproof theater. That said, there are plenty of options for soundproofing and some are more useful than others in certain settings.

To block sound, you need to target the vibrations that become sound waves. This is usually done by adding mass to a wall, for example, or by creating dead air between 2 separate walls. Stopping vibrations prevents the sound waves from becoming sound waves, and is done using a variety of methods.

Sound absorption, however, is the process of absorbing sound waves within a room, and is also known as acoustic treatment. This process involves reducing or eliminating echo, reverberation, and amplification. In short, sound absorption improves sound quality within a space, rather than preventing sound transfer.

Acoustic foam is a perfect example of a product designed to absorb sound (read my RELATED ARTICLE to know why in detail).

It can either come in the egg box form you might see in a recording studio, or something a bit more inconspicuous like wall hangings in an open-plan restaurant. Their job is to reduce background noise and make things sound better.

Part of the reason why it can be confusing for beginners to know the difference between the 2 is because soundproofing is used as an umbrella term. It can refer to all kinds of things, including sound absorption, sound dampening, and more. Plenty of products labeled as soundproof actually aren’t.

This is mainly because it makes things easier to categorize, particularly if you’re looking on an e-commerce site. However, I recommend you investigate products in more detail, as it’s become a label that can be applied to things without it actually being true.

A perfect example of this is acoustic foam’s other name, soundproof foam. If you know much about soundproofing then you’ll know that acoustic foam isn’t designed to block noise. As I mentioned above, it’s about treating acoustics within a space.

Knowing the difference between these terms will allow you to get a better understanding of the industry, meaning you can make more informed decisions. However, this is just the tip of the iceberg, and there are plenty more terms for you to understand.

Above I mention 2 different terms, blocking and absorbing, and you might think these sound like the same thing. While they’re possibly similar, there are differences between them.

Sound blocking is what you need to do for a room to be soundproof. These materials aren’t able to make sound waves disappear, so instead are designed to block the sound waves from entering a space.

The easiest way to do this is to use heavy, dense mass. A brick or concrete wall is a perfect example of heavy and dense mass, but obviously might not be something you can just build in your house to drown out the neighbor’s dog. More applicable options include mass loaded vinyl and acoustic insulation.

Mass loaded vinyl (see it on Amazon) is something known as limp mass, which means it has no elastic properties (source). In short, this means sound waves don’t even bounce of the material, they just stop. And no elasticity means much less chance of vibration, making it an ideal sound blocker. 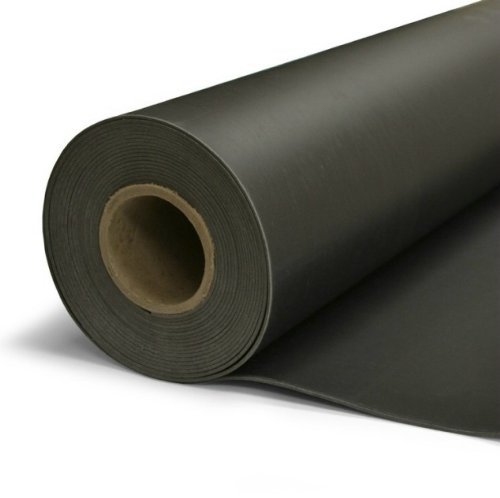 Another option to block sound is to simply create a void that stops sound waves. The industry term for this is dead air, which refers to an air gap between 2 walls (or windows) that’s big enough to stop sound waves travelling through it.

This could be anywhere from a couple of inches to a couple of feet, providing the space doesn’t allow sound waves to bounce and amplify within it. And here we’re back to sound absorption, and you can see how the 2 concepts are used together to create a soundproof space.

A final option for blocking sound is to decouple a wall (read my RELATED ARTICLE on decoupling). This basically means fixing each wall to separate studs so that vibrations are prevented from transferring between them.

Even if you were to hit one side, it would be impossible for the vibrations (sound waves) to travel to the other side, as the walls physically aren’t connected.

Sound absorbers, on the other hand, are completely different in structure. If sound blockers are hard and dense, then sound absorbers are light and airy. This might not sound like it’d be very useful, but it really is.

One of the worst problems in a space is echo and reverberation of sound waves. As the waves reverberate, they amplify, meaning they become louder and more distracting. An open-plan restaurant is again a good example, as the high ceilings give plenty of space for the guests’ voices to echo and amplify.

Sound waves echo by bouncing off a surface, and do so best off hard, flat surfaces. A perfect example is a normal interior wall, which is great for reflecting sound waves. Therefore, sound absorbers are designed to break up this surface, making it harder for sound waves to bounce.

Sound absorbers will generally have an open-celled structure, which is a fancy way of saying they have lots of small holes in them. This allows the sound waves in, but makes it hard for them to get out again. The sound waves essentially get trapped inside the structure, and so are absorbed.

Similarly, sound absorbers are different shapes, such as with a pyramid surface or peaks and valleys. Much like their structure, this helps to break up the surface, which makes it more difficult for sound waves to bounce and reflect off  the wall.

To get the best results from your soundproofing project, it’s necessary to use both sound blockers and sound absorbers. Acoustic foam is realistically the only professional standard sound absorber, but your options for sound blockers are much greater. Which ones you choose will depend on your budget, needs, and space.

What to look out for

Now that you’ve got the key terms sorted, you might be tempted to go out and start planning your project. However, there are a few more things worth knowing before you jump into soundproofing your space. Here are some more terms and things worth considering before you get going:

How to get the most out of your soundproofing project

Having all of these terms at your disposal should allow you to plan a pretty effective soundproofing strategy. To get the most out of your soundproofing, you should choose a variety of methods to combat a range of problems.

First, start by identifying the type of noise you’re looking to block, along with its source. Is your issue a neighbor’s loud TV, or someone stomping around upstairs at 3am?

Or perhaps you want to soundproof a room so that people can’t hear you playing music too loud. Knowing the type of noise you’re wanting to block will help you choose the right options.

Next, decide which methods will suit your needs. For example, you might be perfectly happy with the noise levels in your room, but find that your speakers sound a bit off, and that noise is unclear. This would mean you need to focus on sound absorption or acoustic treatment, rather than soundproofing.

If you can find products with an STC or IIC rating, then great. However, not many places necessarily advertise this, particularly if you’re shopping on an e-commerce site.

To know a product’s rating you’ll usually have to go directly to the manufacturer. I’d recommend doing this if possible because having the rating in front of you can help you to choose the right product.

You’ll also need to think about how big you want this project to be. Effective soundproofing is best done while the space is under construction, but this obviously isn’t an option for everyone. However, if you’ve got the means to decouple walls while building the space, then definitely do so.

Sound absorption, however, is pretty easy to add at a later date. After all, it’s much easier to add a couple of acoustic foam panels to a wall than it is to take the wall down entirely. That said, proper planning is your best option, and knowing your issues and solutions will result in a much better project.

Finally, weigh up which products you can find that block sound, and whether these would be suitable for your project. There are plenty of budget-friendly options available, but these aren’t as effective as the custom-designed products.

It’s also worth paying attention to small gaps, such as around doors or windows. Sound waves work a lot like heat transfer, and airborne sound can easily travel under a door. Working on these little things will make a surprising difference to your overall soundproofing.

Hopefully this article has given you a good base knowledge to work from regarding the difference between soundproofing and sound absorption. I’ve found that knowing which products do what means you can make much more useful plans.

Much like any other industry, there are plenty of terms to pick up in the world of soundproofing. Don’t worry if this all seems like a lot to take in, because as long as you’ve got the basics sorted, you should be able to make a pretty good start on a soundproofing project!

Check out my article on the best soundproofing materials to know what works and what doesn’t.