Although doorbells are obviously important for letting you know someone is at the door, some older designs can be unreasonably loud. If you’ve ever wondered how to silence a doorbell or make it quieter, then you’re in luck. Here’s a quick answer:

Depending on the design, the easiest way to silence a doorbell or make it quieter is to either muffle the speaker system with sound dampening material or to place magnets inside the chime. Specific instructions will vary depending on the type of doorbell. 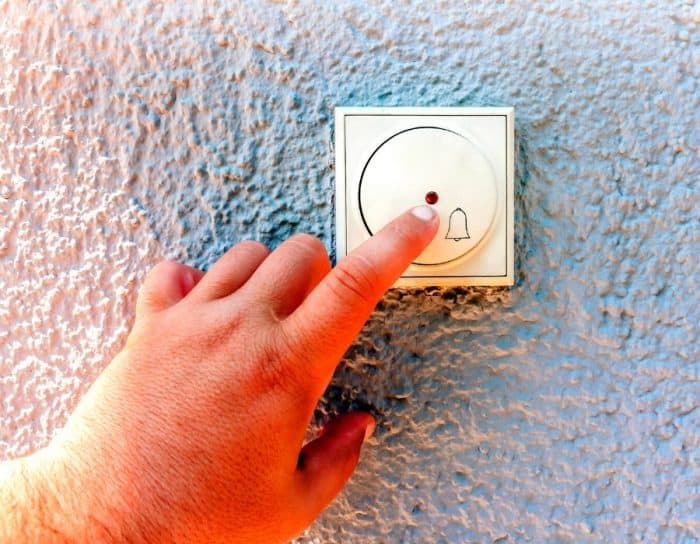 What type of doorbell do you own?

In order to work out the best solution for your noisy doorbell, it’s worth first identifying what type of design it is. This is because some can be silenced much more easily than others.

Here’s a quick rundown of the most common types of doorbell:

Wired doorbells are probably still the most common design, although this is changing. They consist of a fairly simple circuit that’s connected to your home’s main electrical supply.

Chiming units vary massively depending on design, but some can be as simple as a bar hitting a bell, while others use solenoids.

Solenoids are a type of electromagnet shaped like a coil, and they supply an electrical charge to the unit. You’ll probably find that this kind of design has pressure plates installed inside the chiming unit.

You’ll probably find that most older apartment doorbells (ones with talk/listen functions) are wired and will work on more or less the same kind of system.

Wireless doorbells are becoming more popular as people switch to smart devices. The most basic wireless doorbell is one where you simply stick the doorbell on a wall and then plug the chiming unit into a wall socket.

All wireless doorbells use radio signals to communicate between the doorbell and chime. The switch and transmitter are inside the doorbell, and when it’s pressed a signal is sent wirelessly to the chime.

There are more potential restrictions with a wireless doorbell, as the chiming unit has to be in range of the doorbell. However, you can usually add more chiming units to the system so they can be heard throughout the home.

Wireless doorbells are battery-powered, which means they have to be replaced every so often. This is one of the main benefits of wired doorbells: once set up, they can be left alone.

Although technically a type of wireless doorbell, smart doorbells deserve their own explanation. Brands such as Ring are a perfect example of a smart doorbell.

They generally contain a camera and various sensors alongside the standard doorbell button. Smart doorbells connect via Wi-Fi to your smartphone or base unit inside the home.

When it comes to the power supply, most will be battery-powered, but some can be connected to existing wiring for convenience.

Unless you’ve recently moved into your home, you should be aware of what kind of doorbell your home has. If not, spend some time looking into it, although it should be fairly obvious based on the setup.

While the ways to make a doorbell quieter are fairly consistent, some options won’t work on a wired doorbell, for example. Therefore, it’s important to know what you’re dealing with before you start.

How to make a wireless doorbell quieter

When it comes to silencing a wireless doorbell, the process is incredibly easy. Most wireless systems will come with a volume control option on the chiming unit, which you simply turn down.

The same principle applies to smart doorbells, many of which will be controlled through an app. Obviously this should give you plenty of options, such as changing the chime to something less intrusive.

Alternatively, you can always just unplug the chiming unit, but this will of course completely silence the doorbell. As this basically renders the doorbell unusable, there might not be much point to it.

Because wireless doorbells generally give you much more control over things like chiming volume, I’d definitely recommend upgrading to one if your wired doorbell is causing you problems.

How can I silence my Ring doorbell?

If you’ve recently bought a smart doorbell, such as Ring, then you might not know how to make it quieter. Luckily, one of the main benefits of a smart doorbell is that everything is much easier to control.

And that’s all there is to it! While there isn’t a specific volume setting, this can usually be controlled by the volume on your phone or whatever device the app is installed on.

How to make a wired doorbell quieter 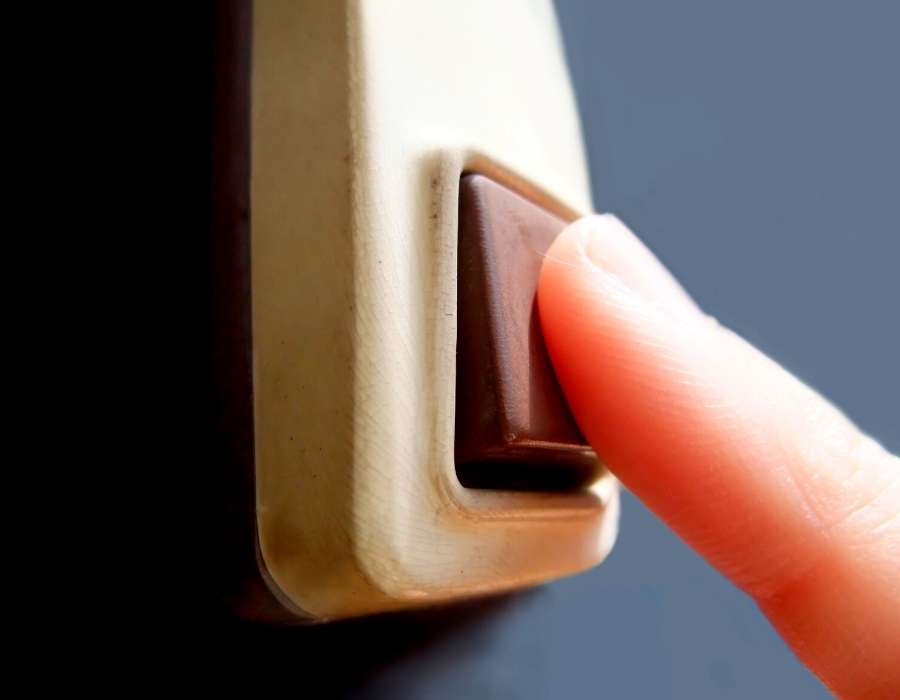 The process for making a wired doorbell quieter isn’t going to be as simple, unfortunately, as many operate on a single volume because they’re circuits are essentially analog.

While it might be a bit more complicated, there are still a few options you can try. Some are less invasive than others, making them suitable for anyone living in a rental property.

The first method we’ll go through is the least invasive and works for any type of doorbell with a chime or intercom. Start by locating this, which won’t necessarily be by the door.

Your doorbell’s chiming unit will likely have a grille in the front, which houses either the speaker or the chime itself. This is where you’re going to try muffling the sound.

It’s best to use double-sided tape for sticking the panel down, but you could use glue instead. Just be aware that glue will prevent you from taking it off when necessary.

Don’t use acoustic foam for this job, as it’s not dense enough. You want a product similar to insulation that’s dense. This allows it to both muffle and trap the sound waves.

The main downside with using this option on an intercom system is that it’ll massively impact your ability to speak into it. You might find you have to remove the insulation when talking into it, which is why tape is better.

Boxing the chime in

If your doorbell is really loud, then you can try a slightly more developed approach. Rather than just covering the speaker grille, you need to box in the entire chime.

This should make a considerable difference to how loud the chime sounds. Some noise can escape through the casing as well as the grille, so this covers all bases.

As mentioned, many wired doorbells use a solenoid to activate the chimes. A clever way of reducing doorbell noise is to use a couple of magnets. This method requires less DIY than the previous one.

Make sure the power is turned off before you start playing around inside the chiming unit. Even if the bell isn’t sounding, you could still get a shock.

For this method, you’ll need 1 or 2 small and flexible magnets. Standard thin refrigerator magnets are perfect for this job. Simply peel the magnets off the plastic casing so you can bend them.

This method works because it reduces contact between the chime and the solenoid. If it doesn’t give enough of a reduction, try squeezing another set of magnets inside the chiming unit.

While this method isn’t particularly invasive, I’d probably avoid it if you live in a rental property or have an intercom. You generally can’t isolate an intercom from the main circuit, so there’s a chance you could shock yourself.

Converting a wired doorbell to wireless

If you fancy an interesting DIY project and don’t want to shell out on a new wireless doorbell, you could always try converting your wired one.

This method isn’t necessarily the most straightforward, but it’s a fun project that you can tell your friends about. For this you’ll need:

If that sounds a bit confusing, this video offers a visual method to make things easier.

Realistically this isn’t the simplest way to make your doorbell quieter, but if you’ve got a bit of electrical knowledge then it’s worth a go.

The most obvious benefit here is that you don’t have to replace your wired doorbell and that it allows you to only turn it off when needed, such as at night.

What’s more, the LED, if positioned correctly, can still be enough of an indication that someone is ringing the bell.

There are several methods you can try for silencing a doorbell or making it quieter. As you can see, it all depends on the type of doorbell you have fitted in your home.

If you only want a temporary solution or live in a rental property, then try one of the less invasive options. However, just bear in mind that these won’t produce the same results as the more technical options.