Air horns are useful at sporting events, hiking sessions, and plenty of other events. However, they can be a bit too loud at times. Whether you’re worried about damaging your hearing or you don’t want to be obnoxious to those around you, it’s a good idea to muffle your air horn before you start using it regularly.

To muffle an air horn, start by adding tennis balls, cotton, or electrical tape to the cone. Next, reduce the size of the cone by shaving it back or replacing it with a new one. If it’s not quiet enough, attach a sock to the end to reduce the sharpness. Test your results and adjust them from there. 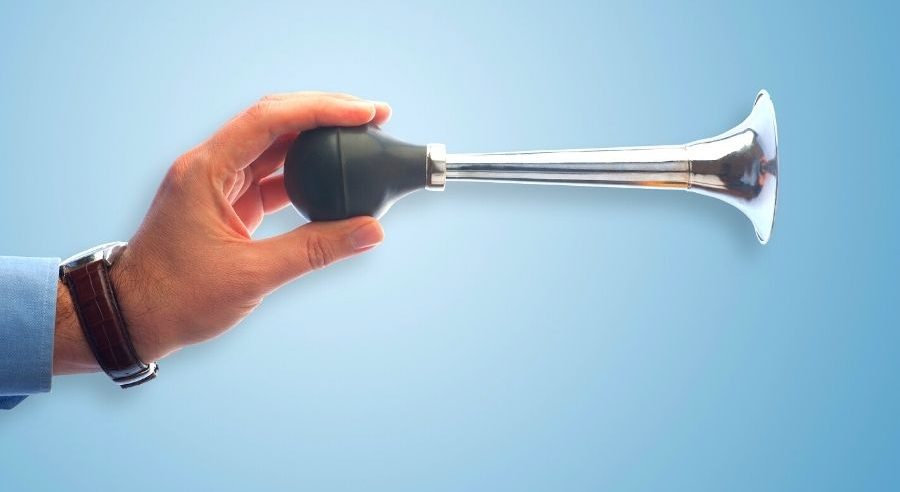 Throughout this article, you’ll also learn the following information about muffling an air horn:

Also read: How to Muffle a Clarinet Effectively

Here are some of the solutions for muffling air horns.

1. Use a Tennis Ball to Quiet the Noise

As the CDC mentions, air horns can immediately damage your hearing permanently. However, there are many ways to avoid such an issue. For example, you can place a tennis ball inside of the cone if it’s big enough. Try using plastic table tennis balls if you don’t have a big enough air horn.

Place the tennis ball inside of the cone, then use tape to secure it in place. Try testing the volume by squeezing the air horn facing away from you. You’ll limit the sound coming out, but it won’t reduce the sharpness of the sound. For more muffling tips, proceed to the next step.

2. Insert Cotton Balls Into the Cone

You can add cotton balls underneath the tennis ball or place them in the cone by themselves. Either way, cotton is known to deaden sound relatively effectively. The denser the cotton balls are, the less noise will come out. Pack them into the cone as much as possible to cut back on the sound.

Note: If you add too many cotton balls, you’ll end up making the air horn useless. Try to fill the cone about halfway full, then test the results. You’ll be able to gauge it from there to see whether or not it needs more cotton balls. Secure them in place using tape inside of the cone.

3. Reduce the Size of the Air Horn

Air horns use condensed air to make the sound, but the cone amplifies it significantly. Using a sharp knife, carefully cut the cone back about ½ of an inch. You can test the results, cut back more, or leave it as it is. Some air horns allow you to remove the cone, in which case you’ll have a bit more safety at your disposal.

If you’re able to remove the cone, you could also make a DIY cone to replace it. Narrow cones echo the sound and add sharpness, whereas wide cones increase the area of effectiveness while reducing the volume.

4. Remove the Cone to Muffle the Noise

Are you still failing to muffle the sound of the air horn? If all else fails, remove the cone completely. This will leave you with a sharp sound that’s not nearly as loud as it was before. Remember that it won’t be able to be modified once you remove the cone, so this should be a last-ditch effort if nothing else works.

As mentioned above, you might be able to twist the cone off without causing permanent damage to the air horn. In this instance, you could give it a shot and squeeze the air horn to see how the cone affects the volume of the air horn.

5. Add Electrical Tape to the Outlet

Electrical tape doesn’t have many sound deadening qualities, but it can definitely reduce the sharp sound of an air horn. Using multiple strips of electrical tape, cover the entire outlet of the air horn.

You could leave a small gap for air release to prevent damage to the unit. This suggestion will also allow the tape to last longer by distributing the pressure.

Since the electrical tape is so thin, you’ll probably have to add multiple layers on top of each other. Make sure you know how many layers you’ve added to adjust the results when you’re all finished. Also, consider using one more strip to wrap around the base of the cone for more sound insulation.

6. Attach a Sock to the End

This step is fairly self-explanatory, but the community over at Reddit suggests using a sock over the outlet of the air horn to reduce the sound. Much like a few other tips on this list, a sock won’t cut back on the sharpness, but it’ll definitely deaden the volume output. You can layer multiple socks until you’ve achieved the desired results.

To prevent the sock from slipping around, use a rubber band around the base of the cone. Also, make sure you pull the sock tight to the outlet of the cone for maximum effectiveness. Layer several socks this way and you’ll definitely notice significant noise reduction.

Tip: Pair this suggestion with the cotton ball step!

Anything that covers the front and sides of the air horn will undoubtedly reduce the volume. However, Acoustical Surfaces points out that soundproofing requires mass and density. In other words, tightly back the wrapped material rather than letting it hang loosely. More material will reduce the sound even more.

Try using pillowcases, leftover fabric, and other malleable materials. Remember that thin, loose materials (like paper, cheap plastic, or coffee filters) won’t have much of an effect. There’s simply not enough mass or density in these types of materials.

Also read: How to Muffle a Tambourine 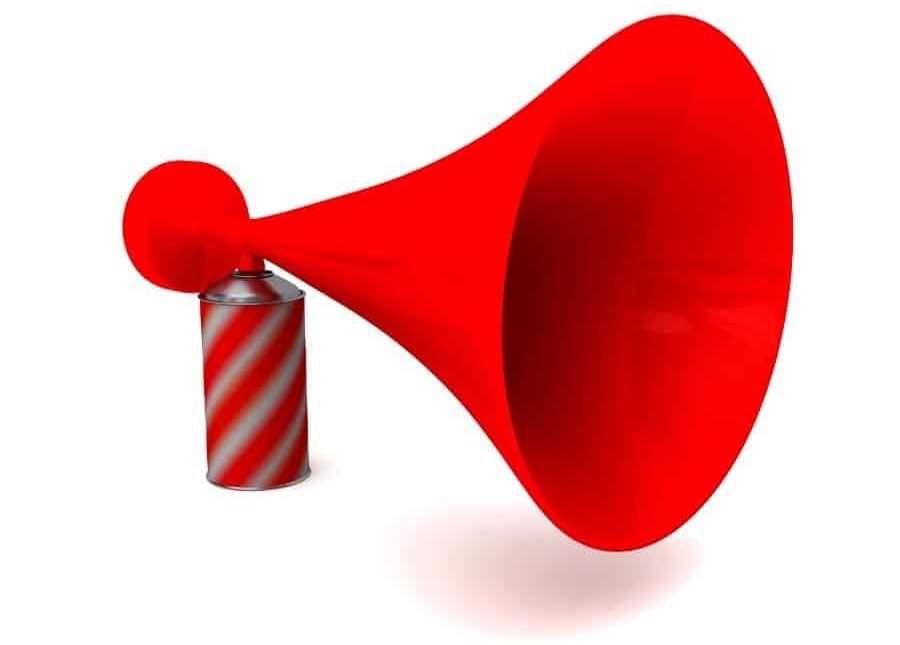 Using a sound meter will allow you to see physical changes in the volume of your air horn. If you’re skeptical or you prefer to see the results, try out the Meterk Decibel Meter (Amazon link). It allows you to see exactly how many decibels are being produced by the air horn (or anything else you have lying around the house).

There’s also a min/max setting that lets you see the minimum and maximum decibels put out by an object. You can set the max, squeeze the air horn, and review the highest sound that it put out. Use the suggestions mentioned above, then try testing your results and adjusting them in the final step below.

Once you’ve seen the physical proof that you’re making progress (or lack thereof), you can go back and change the air horn even more.

Some people have better luck with stuffing cotton balls and using socks, whereas other people find that it cuts back on the sound too much. By using the aforementioned decibel meter, you’ll be able to control the sound output much easier.

Remember that there are certain times when a loud air horn is necessary, such as hiking in bear country. However, you should muffle an air horn if you’re at sporting events or other situations where people are closely seated near one another.

Air horns are very useful in a variety of situations, but they’re often far too loud. The good news is that you can muffle the sound to prevent hearing loss or obnoxious sounds.