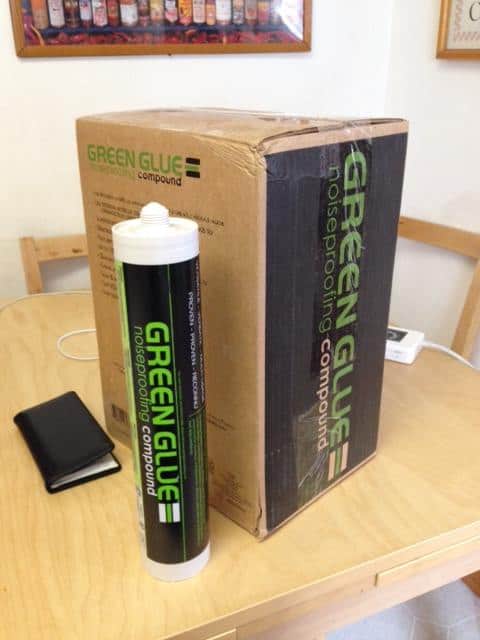 If you want to have a recording studio or a dedicated home theater room in your house, you will want to soundproof that room to the highest possible extent.

If you are in a middle of a recording, can you afford to have outside noise messing with it? Don’t you like to enjoy a movie without any disturbance? In that case, you most probably would need the Green Glue Damping Compound (Amazon link).

What is Green Glue?

Green Glue has been the most popular choice of soundproofing experts for many years. It is also considered the most effective damping product in the market.

It has a unique polymeric formula that converts mechanical energy of sound waves into heat energy. This helps in damping the sound vibrations of walls and ceilings making it a great soundproofing material.

Why Do Experts Recommend Green Glue?

How to Apply Green Glue

I found the application process pretty simple. What you would need is a caulking gun with which you will spray the compound on to the drywall sheet.

After you have the first drywall layer up, you can start the process. It is best to first spray along the borders so that the areas close to the edges are not missed out. After that spray randomly in any pattern all over the sheet. 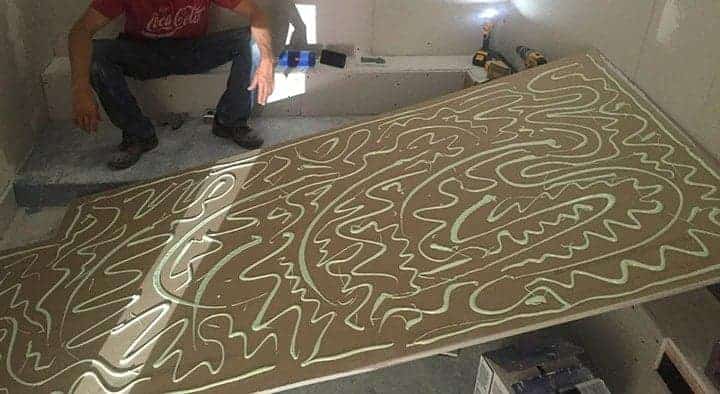 Two tubes are recommended by the manufacturer for each 4’x8′ sheet of drywall. One can also be used per sheet but that will have 70% effectiveness as two tubes.

After applying, the curing starts and effects will be felt after seven days. There will be a continuous improvement in soundproofing thereafter till the compound cures fully. Curing can take upto 60 days. 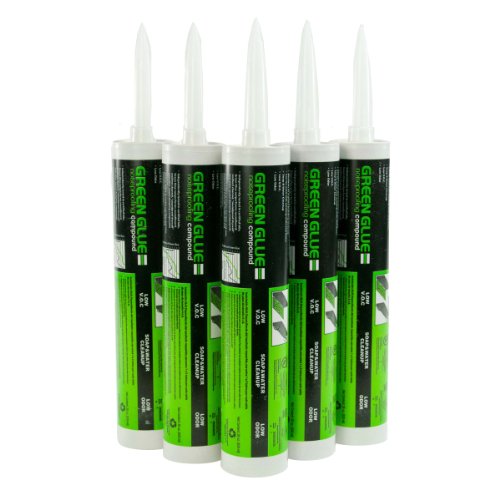 The tubes are suitable for small to medium applications. Green Glue tubes are sold by the company in sets of 6 and 12. 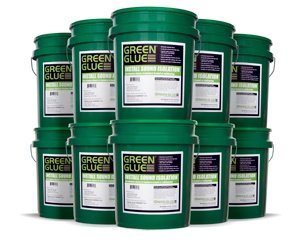 Green Glue Pails (Amazon link) are suitable for large area applications. Each pail contains 5 gallons which is almost twice the amount of compound that comes in the 12 tube set.

The cost of a pail is about $300 which is approximately $100 more than a set of 12 tubes. Hence, buying a pail instead of tubes is a cost-effective option. 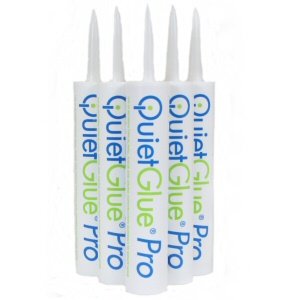 The only real competitor of Green Glue is Quietglue Pro (Amazon link).

It is very similar to Green Glue in terms of packaging. Like Green Glue, Quietglue Pro is also sold in 28 oz tubes and 5 gallon pails.

There is a one gallon pail option which Quietglue Pro offers besides these.

Quietglue Pro makes the same claims that Green Glue does. But, most soundproofing experts recommend Green Glue and verify the authenticity of its lab test reports on performance.

There is a lot of positive feedback for Green Glue on Amazon. In comparison, Quietglue Pro doesn’t have very good customer feedback.

There is a problem which many users have faced with Quietglue Pro. Unlike Green Glue, it does not harden quickly enough to stick to the surface. So, when you put up the drywall, the compound keeps dripping and creates a mess.

For insufficient feedback on performance and the mess created by dripping of Quietglue Pro, I would stick to Green Glue.

Even though it costs a bit more than Quietglue Pro, it is fairly inexpensive for a high-performance soundproofing product.

Damping is one of the four elements of soundproofing. What a damping material does is that it converts sound (kinetic) energy into heat energy.

In other words, it dissipates the vibrations of a wall or ceiling caused by sound waves and retards the transfer of sound energy. Green Glue is a Constrained Layer Damping product.

Why is Damping Required?

We know that high mass structures on walls like multiple layers of drywall or MDF, offer resistance to sound. More the mass, more difficult it is for sound to vibrate the surface.

However, at some frequencies known as resonant points, it is difficult for the heaviest of walls to prevent vibrations caused by sound. But if the surface is damped, these vibrations can also be reduced drastically.

The figure below compares the structure-borne sound of a wall without damping with that of a wall which has been treated with Green Glue. 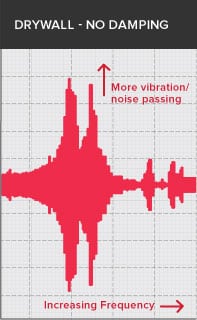 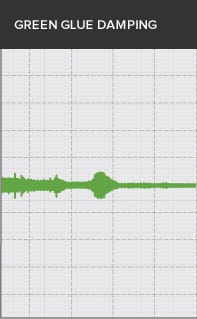 Is Green Glue a Miracle Product?

No. Green Glue cannot work alone, it has to be sandwiched between dense materials like thick drywall or MDF to be truly effective.

Though it is not a miracle product, it is definitely a revolutionary product considering its cost and effectiveness as compared to other products.

Click here to check the prices of Green Glue tubes at Amazon.