While many people enjoy the noise rain makes on windows, for others it can be a big distraction. If, like me, you live in a particularly rainy area, you might be wondering how you can stop rain noise on windows. Well here’s a quick answer:

The best way to stop rain noise on windows is to fit shutters outside for another layer between you and the rain. Alternatively, you can put up some sound dampening blinds or curtains indoors so you can’t hear the noise. Finally, you could fit new, thicker windows. 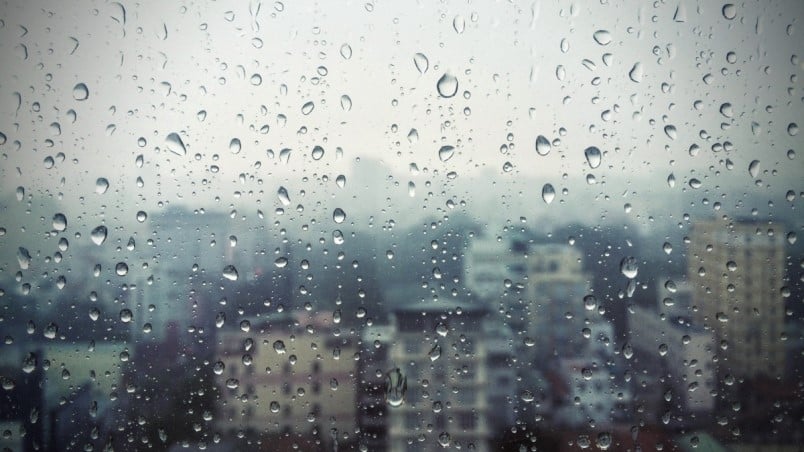 Check out my guide on soundproofing windows.

In this article, we’ll look at the most effective solutions for stopping rain noise on windows. These solutions work as general window soundproofing too, so give them a try if you’ve got other noise to block out.

Anyone who’s ever tried to soundproof a room before will know that windows are a problem area. The biggest issue is that – compared to solid walls – windows are relatively thin.

Glass itself actually transfers fewer sound waves than many other solid objects. To understand this properly, let’s recap how sound waves transfer through objects.

Until sound enters your ear, it’s vibrational waves. This is how it travels through the air: the waves make particles vibrate, which carries the wave further. When a sound wave hits a solid object (a wall, for example), this process continues.

Sound waves make the particles in solid objects vibrate, which transfers the sound energy from one side to the other. However, in the process, some energy is absorbed and some is reflected. This is why sounds are quieter after passing through an object.

Glass is a bit different though. It’s known as an amorphous solid. In short, this means the particles are arranged randomly rather than in a crystalline pattern normally found in solid objects.

This is well suited to soundproofing purposes because it means the material has a higher level of absorption and internal reflection. But the real issue, as I mentioned, is that windows are much thinner than other solid structures in the home.

Another thing to consider when thinking about soundproofing windows is whether the sound you’re trying to block is impact or airborne noise. These terms are pretty self-explanatory, but for example:

Impact noises will generally be clearer when heard through a solid object because the noise source is closer to the surface. In fact, it’s in direct contact.

Rain hitting a window would be impact noise. The sound you can hear is literally the raindrops hitting the window’s surface. While it may not be loud, it’s a much clearer sound than, say, the rain or wind in the trees in your backyard.

How to Stop Rain Noise on Windows

To stop rain noise on windows, then, we need to address impact noise. There are a number of options depending on how much time you have and how much money you want to spend.

In this list, I’ll cover some quick fixes that are both inexpensive and easy to set up. But there are also some more intricate options that’ll stop this specific problem and offer better soundproofing in general. They are more expensive though.

Here are my top suggestions for ways to stop rain noise on windows:

The first option is to install shutters (related article) outside, as this’ll put another layer between the windows and the rain. While it won’t stop rain noise, it’ll mean the noise is created on a separate surface.

The main benefit is that there’s an air gap between shutters and the windowpane, which will help to reduce sound transfer, particularly from impact noises.

Doing this should completely solve the problem, as rain noise generally isn’t loud anyway and so adding another solid surface will do a great job.

I’d recommend fitting shutters that are made from a material with some sound dampening properties, such as wood instead of metal. You can also get shutters with thermal insulation, which helps with soundproofing.

The only real downside is that this can be fairly expensive. Unless you’re good at DIY you’ll likely have to pay someone to install them, which will only add to the cost.

Also, shutters block out light when closed. This means that if you want to block out rain noise during the day then you’ll have to sit in a dark room. While this isn’t the end of the world, it’s not the greatest solution.

2. Check your windows are properly insulated 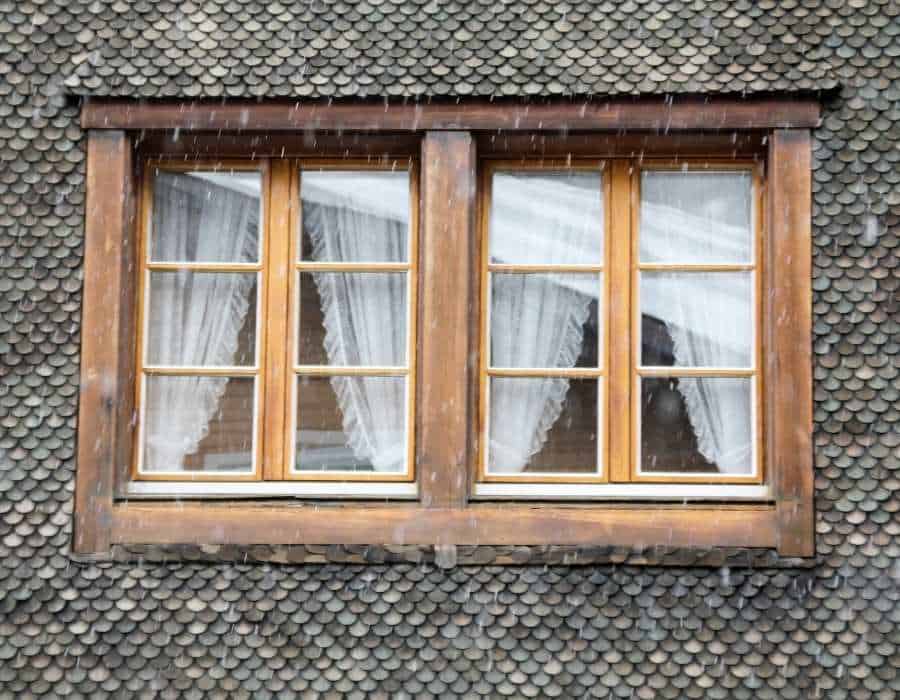 Double-glazed windows are pretty standard in most households now. The benefit of double-glazing is that it offers a greater level of thermal and sound insulation.

This is because of the cavity between the two panes of glass. The cavity is filled with gas, usually argon, as this reduces the amount of heat and noise that can pass through a window.

Over time, particularly if the windows aren’t sealed properly, this gas can escape. The more air in the cavity, the less it does in terms of insulation.

The solution is to either replace the windows completely or get someone in to refill the cavity with argon gas. This generally shouldn’t be too expensive and is a good idea anyway. 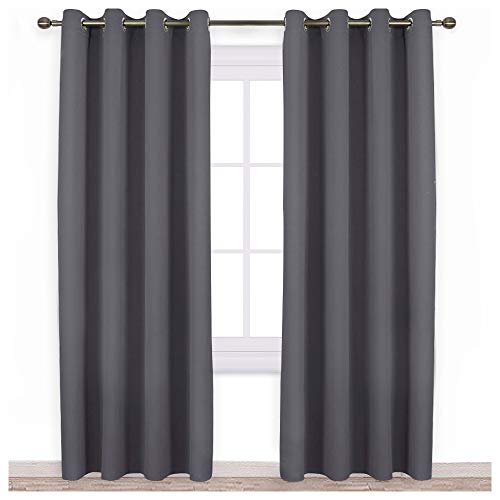 I generally don’t advise using soundproof curtains, as they’re often not up to the task. However, for noise as low as rain noise, they’re more than up to the task.

Soundproof curtains are often just curtains made from heavy material, or with several layers of fabric. This helps to dampen any noise that passes through the window, as the heavy, flexible fabric has poor sound transfer properties.

For example, soundproof curtains such as these on Amazon have a layer of thick black yarn inside. This helps to provide the curtains with weight and improves their sound dampening properties.

Check out my top picks for soundproof curtains.

As with shutters, the main drawback is that it compromises the amount of light in a room. So you’ll have to choose between rain noise and light, but this’ll really depend on how distracting you find the sound of rain.

Soundproof curtains do also offer a level of thermal insulation, which can often be a benefit. If your room is a bit chilly during the colder months, insulated curtains could be a good idea regardless.

Making your own soundproof blinds is a cost-effective and easy way to reduce noise coming through a window. The most technical part is installing a blind roller on the wall, but if you’ve already got one then the rest is really easy.

I’d recommend using a blind roller with a connector (Amazon), as you’ll want something to lock it in place. This is because MLV is a fairly heavy product, and so the blind might have the tendency to roll down under its own weight.

Mass loaded vinyl is a great product for soundproofing because it doesn’t vibrate when sound waves make contact. Instead, it just dissipates the waves, making it ideal for this kind of project.

As with many of the other solutions, a soundproof blind will block out light when it’s in use. However, it’ll also do a good job of blocking out the sound of rain hitting the windows, so is worth a try.

What’s more, it’s probably the most cost-effective option on this list (other than buying soundproof curtains). The most expensive part is the mass loaded vinyl, but you can use any spare for a range of other soundproofing projects.

Hopefully, this article has given you some inspiration for how to stop rain noise on windows. If you’ve got the money, replacing the windows with a more updated option is best for both thermal and acoustic insulation.

However, if you’re looking for a quick-fix, building your own soundproof blinds will do the job just fine.