A basement bedroom is a very convenient place to set up a room for band practice. And the best part is that it is easier to soundproof as compared to other rooms in the house.

One thing you need to keep in mind is that if you soundproof the bedroom in your basement properly, you may not be able to continue using it as a bedroom. 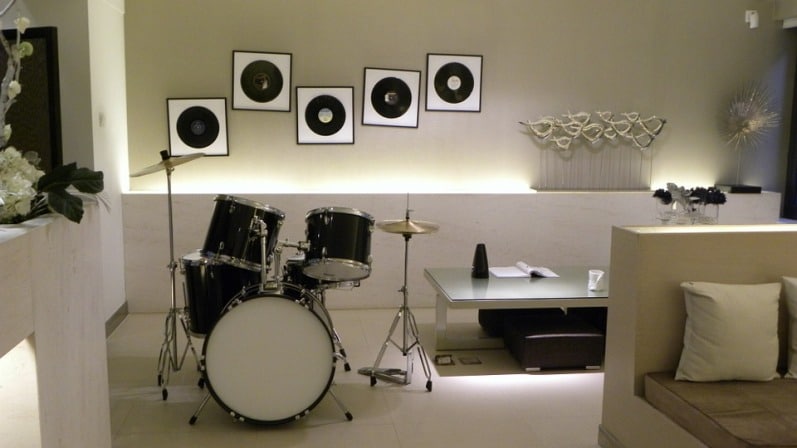 Usually, there are building codes associated with basement bedrooms. For instance, a window for an emergency fire exit may be mandatory and you may want to remove it for soundproofing.

Another point I would like to mention up front is that it is a misnomer that the ceiling is the only area which you need to concentrate on. Many believe that if the basement ceiling is soundproof, then the whole room will become soundproof.

However, if you don’t do anything about the walls and floor, sound will get transferred upstairs through flanking. That’s the bitter truth about sound transfer and that is why soundproofing is never easy or cheap.

The bottom line is this – in order to soundproof a room, you will have to soundproof all the surfaces, that is the walls, ceiling, floors, windows, and doors.

A basement bedroom, like any other room, can be soundproofed by employing the four elements of effective soundproofing.

Ideally, we would like to employ all the elements of soundproofing. However, this may not be possible as budget and time would be primary factors to consider.

It would also depend on specific situations as well. If you do not have neighbors to disturb or a baby at home to wake up, then maybe, some tolerance would be acceptable. However,  if you are affected by such factors, you will have to employ most, if not all the elements of soundproofing for the project to be really effective.

Knowing What You Are Trying To Achieve

Soundproofing levels can be quantified and knowing the levels that you want to achieve is critical. It is ok to go overboard a bit but if your requirements are not that much, then why overspend.

Questions like, how loud will the band practice get, will you be practicing at odd hours or late in the night, how will your neighbors and family be affected by your band practice and vice versa; should be discussed with all fellow band members.

Once, you know what is to be achieved, identify an STC (Sound Transmission Class) which best suits your requirements.

In my article on soundproofing walls, I put up a table about what each STC corresponds to. Here it is again.

In this article, as I describe various ways to soundproof the ceiling, walls, and floor of a basement bedroom for band practice, I will mention STC figures so that you will know which method will suit your requirement.

How To Soundproof A Basement Ceiling

I will first discuss about the ceiling because it is the most important portion as far as a basement bedroom is concerned.

A basement ceiling is most affected by direct impact noise coming from footsteps or moving of furniture on the floor above. 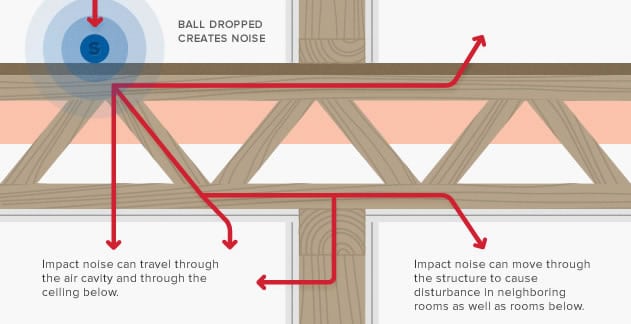 Decoupling, in simple terms, is creating an air gap between two surfaces so that the air acts as a sound insulating layer.

Decoupling a  ceiling would involve the sacrifice of room height. The main problem which some people face in basement bedrooms is height. Many basements have a ceiling height of not more than 8 feet. If you would be decoupling, then keep in mind that you would be losing a few inches of precious space.

There are a few ways in which you can decouple a ceiling. The most effective would be to install separate joists which are running parallel to the existing joists but at a height lower.

The drywall will later be screwed on to the new joists. With this, the ceiling drywall will be decoupled from the upper floor and an effective level of soundproofing is achieved.

An alternative is to use sound isolation clips and resilient channels but would be lesser effective than isolated joists.

The next step is to fill the gaps between the joists with loose fiberglass insulation. The insulation itself is not going to do wonders for soundproofing but will prevent the walls from resonating when you play your instruments.

Insulation will also assist in the dissipation of sound vibration as it travels through the insulation fibers. Make sure that the fiberglass insulation is of low density. Read about my recommended insulation materials.

After decoupling, mass is the most critical element of soundproofing. Here is where most people go wrong.

If you want to soundproof a room, you have to have mass. It is a common and unfortunate misnomer that foam can be used to block sound.

As I have brought out in many of my articles, when sound waves strike a surface they create vibrations and it is the vibrations that transfer sound. If the surface itself has a lot of mass, it would be difficult for sound to vibrate it.

The best materials for soundproofing would be drywall, MDF, and OSB because they are heavy. The most practical material out of the three is drywall as it gives the best efficiency for the cost.

So, after you have decoupled your ceiling and put up the insulation, the next step would be to install the heaviest drywall (⅝”). Make sure that after you finish, you seal the gaps with acoustic sealant (Amazon link).

The 4th element of soundproofing can actually do wonders. Constrained layer damping will convert the kinetic energy of sound vibrations into heat energy and will thus, dissipate sound.

The most cost-effective is Green Glue which can easily be sandwiched in between two layers of drywall . The best part is that there will be no loss of valuable space in the room. Read my article on Green Glue to know more.

What is Right for You

In the whole exercise of soundproofing the basement ceiling, the most difficult part is decoupling. Decoupling is expensive too but definitely worth it. If you do not have the time or the budget for decoupling, then try your best to employ the other three elements of soundproofing.

The STC values achieved from the various methods described above are as follows:-

While the STC difference of single and double layer of drywall may not appear much, the actual difference is more. However, notice the gains with Green Glue Damping in between the two layers of drywall.

The decoupled ceiling cannot be matched and that is why it is the best option to go for even if it costs a bit.

If you already have insulation between the joists, you will not have to remove the existing ceiling drywall. All you will need to do is to install the second layer which should not cost much.

How To Soundproof Walls Of A Basement

The principles involved in soundproofing the walls would be similar to those used for the ceiling. Basement walls are made of concrete. Though concrete is heavy, it is also a good conductor of sound. So, you will have to add a layer of drywall. 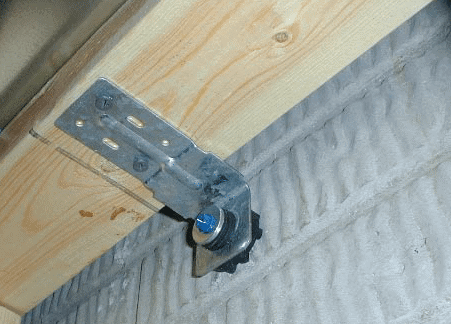 To decouple the frames of the drywall from the existing concrete walls you will require spacers as shown.

These spacers will create a gap between the concrete wall and the frame and this will minimize sound transfer.

You can also have sound clips and hat channel as you did for the ceiling for more effective decoupling. However, this is not absolutely necessary if you have already decoupled with the help of spacers.

Stuff loose fiberglass insulation in between the studs. As brought out earlier, this will not do wonders for blocking sound but should not be skipped as the resonance created by the sound of musical instruments will cause unwanted noise.

Once you have your decoupling done and insulation fitted in the gap between the studs, the next thing to do is install the drywall.

The drywall should be the heaviest that you can find. Many home theater owners prefer to install two layers of drywall. It’s a good idea to do the same for a room that will be used for band practice.

More the mass that you have up on the walls the better it would be. And again, don’t forget to seal the gaps with acoustic sealant.

If you have the budget, then go for green glue damping in between the two layers of drywall. If you can afford only limited amounts, it would be best to use Green Glue for the ceiling because the ceiling is more critical.

So you can do away with Green Glue for the walls but I would suggest you have two layers of drywall nonetheless.

What is Your Requirement

The STC values have already been brought out earlier. However, as you are more concerned about noise being transmitted upwards, you can afford lower STC values. However, if there is another room in the basement which you want to isolate, then there would be no relaxation.

You can have a room without windows but you cannot do away with doors. All the efforts that you would have put into soundproofing the ceiling and walls will go waste if you do not do anything about the door.

Make the door as heavy as you can.  The best solution is the communicating door.

Alternatively, to save costs, you can go for a solid core door but even solid core doors are not too cheap. Some investment would be required into that door and it cannot be neglected.

If you are going to convert your basement bedroom into a room for band practice, I would suggest to completely remove any windows that you have in it. Soundproofing windows are not only difficult but also expensive.

However, you can go for a window plug which is a cheaper alternative and is used by many home theater owners. I have an article on this site which describes the construction of a window plug in detail.

The methods used in soundproofing the ceiling and walls cannot be practically used for the floor. You cannot install drywall on the floor. But the basement floor has earth below it which is a very good insulator.

A cheaper alternative which will give you decent results is cork underlayment.  Check out my recommended floor underlayment product for soundproofing a floor.

The methods brought out in this article can be used for soundproofing a basement bedroom for most purposes.

If you want to use it for home theater, you would probably require decoupling as movies and music would get really loud.

The STC values are a good guideline but are not 100% accurate and will not guarantee results as described. It is best to go for methods which will give you an STC which is a bit higher than described.

While going about soundproofing, always remember that all air gaps need to be sealed. With that, I wish you the best for your soundproofing project.

Thanks for reading! Before you go, take a minute out and check out my top recommendations for soundproofing products.