If you’re lucky enough to have a basement in your home, then this can be the best place to set up a decent home theater. Alternatively, if you live in a basement apartment, then it can be helpful to drown out the noise of your upstairs neighbors. Either way, you’d benefit from some soundproofing solutions for your basement ceiling.

In this article, I look at the cheapest ways to soundproof a basement ceiling. Just bear in mind that my emphasis here is on cost-effective methods, and while this might not be as effective as some dedicated soundproofing solutions, they’ll still definitely make a difference.

What Sound Are You Blocking From Your Basement?

In short, airborne sound is exactly what it sounds like: noise that travels through the air to reach you, such as voices from the TV or a dog barking. Airborne noise requires different solutions to impact noise.

Impact noise, on the other hand, is the sound made by an object hitting a surface. The most common source of impact noise in a house (particularly for a basement) is footsteps.

Simply put, airborne noise is more likely to leak through small gaps (such as door frames or around windows), whereas impact noise travels through surfaces. Considering you’ll likely have both types of noise coming in, it’s worth trying solutions for both. Luckily I discuss options for both in this article.

I discuss these in more detail below. Once you’ve identified the source of noise, it’s time to try some options. These choices emphasize cost-effectiveness, but will still provide noticeable results.

The best piece of advice I can give is to work out your budget first, so that you know which options you have, and then to also consider your DIY abilities. Thinking of these things beforehand should make you much more successful.

The cheapest ways to soundproof a basement ceiling are explained below.

1. Fill any small gaps in the basement ceiling

The first thing you should try before adding any more mass to the ceiling is to fill any small gaps, as these can be a major source of noise pollution. Realistically, we won’t be talking gaps big enough to see through, but smaller gaps such as those between floorboards or ceiling joists.

Also, this is one of the easiest and most cost-effective solutions to try, hence why it’s first on the list. You may be very surprised at the results of something so simple, and it’s definitely worth trying before you move on to any of the other options.

The best thing to use for filling gaps is builder’s caulk, as this is exactly what it’s designed to do. You can pick this up in every DIY store (or online) and it’s really not very expensive. However, if you want to do the job properly, I’d recommend spending a bit more money to get some proper soundproofing caulk.

The major difference is that soundproofing caulk, which is commonly known by the brand name Green Glue, has more elastic properties than the normal stuff. This means it has a better chance of reflecting sound waves, while also moving with the building. Essentially this prevents it from cracking if there is any movement, which prolongs its life.

All you need to do is fill any gaps in the ceiling with this caulk, and then give it a few days to dry. Problem areas include the edges of a room or the space between boards, but pay attention to even the smallest gaps if you want this to be completely effective. 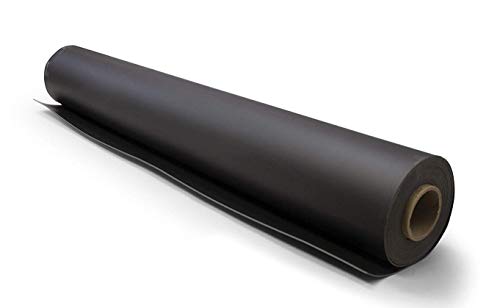 Mass loaded vinyl (Amazon) is one of my favorite materials for soundproofing because it’s easy to get and easy to work with. The name is fairly self-explanatory, as the product is basically heavy vinyl.

The reason this is effective for soundproofing is that it adds more mass to the structure, therefore reducing its ability to vibrate. This in turn reduces the distance a sound wave can travel through the structure, which reduces noise pollution.

You can pick up mass loaded vinyl fairly easily online, and websites like Amazon have several different products. It comes on fairly big rolls, so while they might look on the pricier side, you don’t have to buy many.

Instead, I’d recommend mounting it on to a piece of drywall or similar structure first and then attaching this to the ceiling. A flat, rigid material is much easier to work with than a sheet of the product. It doesn’t really matter whether the mass loaded vinyl goes on top or underneath, but favor putting it on the ceiling side whenever possible.

Generally speaking, acoustic foam actually reduces echo and reverberation, which is considered acoustic conditioning rather than soundproofing. However, if you reduce the ability of sound waves to echo then in turn you reduce their ability to escape to another room.

In short, this means that you shouldn’t use acoustic foam on its own, but it becomes a very effective solution when used alongside something like mass loaded vinyl.

Acoustic foam comes in many different formats, and those that are most effective at canceling echo have quite an open structure. However, if you’re leaning more towards the absorption end, then choose something with a denser structure.

It’s also really easy to install because all you need to do is attach it to the surface. This can be done in almost any way, but I’d recommend using glue or attaching the foam to wooden panels that can then be screwed to the basement ceiling.

Adding soundproof insulation is particularly effective if the ceiling is open joists, rather than covered in drywall. However, if you have a drywall ceiling installed in your basement, I’d recommend taking it down before adding any insulation. This is because the insulation will need to be covered once installed.

If you’re on a tight budget, then normal fiberglass cavity insulation works fine, but if you can justify spending a bit more money then I’d recommend opting for acoustic insulation.

Acoustic insulation blocks sound waves through its density and structure. Sound waves get trapped in the insulation and therefore aren’t able to pass through. This works well for both airborne and impact noise.

A major brand in acoustic insulation is Rockwool, which is available online from a number of sellers. You simply need to cut the pieces to size and fit between the ceiling joists. Be sure to leave a small air pocket above the insulation as this will increase its effectiveness.

Cavity wall insulation is generally made from fiberglass, which isn’t the nicest thing to leave exposed in a room. This is why I suggested you install it above the drywall, as this will prevent any fibers from escaping into the room. However, this does make the project a bit more technical, so make sure your DIY skills are up to scratch.

5. Add some drywall to the ceiling

Adding more drywall to the ceiling works on the principle of adding more mass. Extra mass makes the structure heavier and therefore less likely to vibrate due to sound waves. While drywall isn’t the heaviest product, it’s readily available from almost any DIY store.

Essentially, the more you add the better. You can also buy acoustic drywall, which usually has some extra soundproofing materials added, but this can be more expensive. If you’re on a budget, then normal drywall should make enough of a difference.

A way to make drywall much more effective is to also install resilient channels. In short, these are small strips of metal onto which you attach the drywall. They act as isolation between the new layer of drywall and the existing ceiling, which reduces the ability of sound waves to pass from one to the other.

This works on the same principle as decoupling, which isn’t a particularly complicated project but can become expensive, hence why it’s not included on this list.

This is arguably one of the more cost-effective solutions because you don’t really have to use any dedicated products. That said, it can become expensive if you start looking at specialist acoustic drywall, so make sure you keep an eye on your budget as you begin planning.

6. Make alterations to the room above

My final solution on this list isn’t going to be applicable to everyone but can make a difference. Aside from working on the basement itself, another option is to make changes in the room above. This is obviously more effective if you’re trying to stop sound traveling into the basement, but does have an impact on noise leaving the basement.

There are a number of options you can try if you have access to the room above your basement. These include:

While there are some other options you can try, these are probably the most effective. What you may have noticed is that none of these really soundproof the room, but instead work at reducing the amount of noise that enters the basement in the first place.

Carpets and rugs are often heralded as an effective way to soundproof on a budget. However, they don’t really soundproof things, but can be effective at dampening sound. This means that they make things like footsteps more muffled by adding a soft layer between the source and the impact surface.

Of course, thicker is better when it comes to carpets and rugs. Another option is to add some thick carpet underlay (or mass loaded vinyl) under the carpet to further increase the barrier on the floor.

Just bear in mind that these options won’t do much on their own, and should always be combined with some soundproofing solutions on the basement ceiling itself. They work to reduce the level of noise traveling through the surface, rather than blocking out the sound.

Soundproofing a basement ceiling doesn’t need to be expensive. As I’ve shown, you can achieve noticeable results with some fairly standard household materials.

The thing I can’t stress enough is to try several of these in combination for maximum results. Similarly, plan everything in detail before you start so you’ll have an idea of which solutions will be most effective.