With the speed at which iPhones update their software, it can be difficult to keep up with all the new features installed. This is particularly true for alarms and warning noises, as these might change without you knowing. 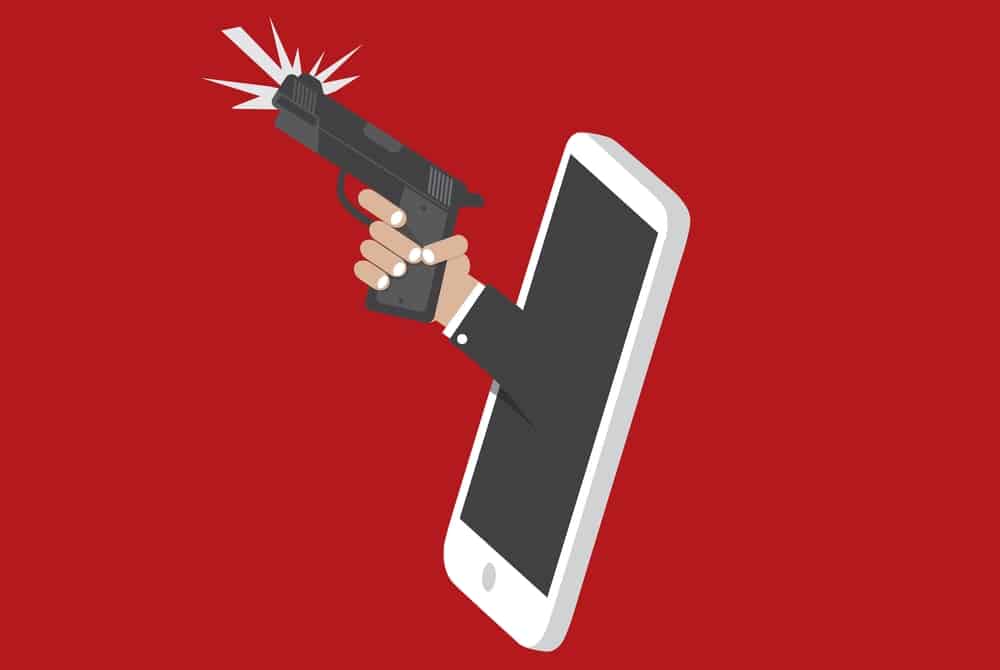 The most common alarm and noise issues for iPhones

Even if you consider yourself to be fairly technologically minded, it can sometimes be difficult to get to the route of a problem when it comes to your phone.

Many of the resolutions are less obvious than they should be, leading you to search the internet in frustration looking for the answer. Well here is my list of the most common alarm and noise issues on iPhones, along with how to fix them.

This is a relatively common issue that many people have experienced in the last 4 years or so. Back in 2016 after an IOS 10 update, Apple installed an SOS feature on iPhones, but not many people knew it was included.

While there’s always been an option to make emergency calls, the new feature added the ability to do this much more quickly. Rather than placing a call in the traditional way, the new feature allowed you to do so by pressing the power button 5 times.

However, this obviously led to many people setting it off in their pocket or bag simply by moving the phone around. The feature gives you a 3-second timer to cancel it but then makes you aware of the call by making a loud siren noise.

This is arguably not the most useful thing for a number of reasons. First, pressing the power button 5 times by accident is more common than you might think, particularly if you don’t have a big case on your phone.

Second, whoever thought an ear-piercing siren as a warning in emergency settings is perhaps not the cleverest person in the world. Although it might be useful if you’ve fallen down somewhere, it wouldn’t be particularly useful if you’re hiding from a home intruder.

Either way, it’s useful to know how to turn it off, particularly if you find yourself setting it off all too often. Luckily it’s really easy to do in the settings menu (it’s enabled on phones by default).

Hopefully, this means your phone won’t turn into a siren in your pocket when you least expect it!

Your iPhone making high pitched beeping noises is a potentially difficult problem to resolve because there can be a number of causes. The most obvious is a notification-heavy app, such as Messenger, which will notify you whenever someone messages, when they type, and when they read a message.

It could also potentially be a software glitch or hardware issue, which are harder to resolve because they might require specialist repair. However, I’d try changing your notification settings first to see if this resolves the issue.

Click on the Notification Center under the Settings menu. Make your way through the listed apps to see if they have permission to alert you with a sound notification. If they do and you don’t want them to, simply disable this feature.

Some apps might let you change the notification sound, but this isn’t always the case. If you have a particular dislike of a certain app’s noise, then simply disable it. You can still receive written notifications and can keep the vibrate setting on.

Software issues can be caused by apps running in the background or not closing properly. The easiest way to try to resolve this is to force-close all apps. Double-tap the Home button twice and swipe left to reveal the list of open apps. From there, flick up or down to close them until the list is empty. If one of the apps was causing the high pitched beeping sound it should have now stopped. If not, then it’s a sign of a bigger problem.

The final issue could be potential hardware problems, particularly if it’s an older phone or you don’t turn it off too often. Never underestimate the power of turning something off and on again. However, if this doesn’t resolve the issue then you might need to see a specialist.

One of the more problematic issues experienced by iPhone users is the loud buzzing noise they sometimes make. While this is an issue that Apple claim to have resolve in their more recent models, some users still experience it.

The loud buzzing noise you sometimes experience coming from your iPhone has been dubbed “coil whine”. In short, it’s caused by the processor working under too much stress, which causes the components to vibrate.

However, there isn’t really a definitive fix for this problem because there are not loads you can do to cut down on processing power, other than closing apps. Another solution is to power your phone down and restart it.

Actions that require a lot of processing power can include downloading apps, streaming content, or playing games. You might find this is more of an issue in older models, particularly if they’ve passed their 2-year lifespan.

The issue could also be triggered by updating your IOS, as many users found that updating their system required a lot of power as the phone upgraded. Again, there’s not much that can be done about this, other than leaving your phone to do its thing.

If you experience this problem regularly, then your 2 options are to contact Apple if you’re under warranty or to upgrade to a newer model of phone.

4. Will the iPhone alarm go off in silent mode? 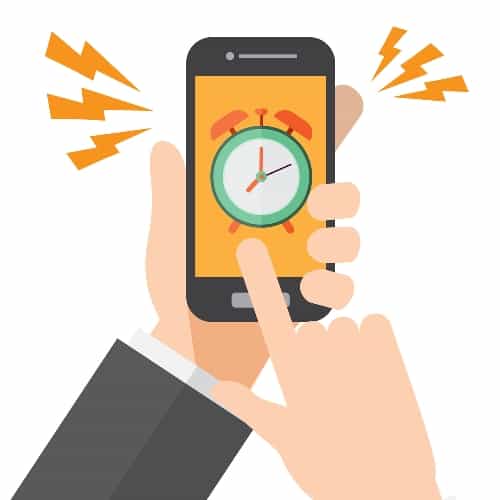 It makes perfect sense to put your phone on silent mode when you go to sleep so that you’re not woken up by notifications during the night. However, if you use it as an alarm, then you might be hesitant to keep it on silent if it doesn’t go off.

The only way to prevent an alarm from making noise is to turn the sound notification off. However, this effectively removes the purpose of an alarm and so doesn’t really make sense.

The better alternative, particularly if you want silent alarms during the day, is to set calendar alarms because these can be set to vibrate. Simply open the calendar and create an event at the chosen time. You can adjust the alarm settings as you create the event too.

Although it was a much more common issue when the iPhone 8 was released, some users still experience a crackling noise coming from their phone when they make calls.

It’s not solely confined to Facetime calls, although these are one of the most common types of call made on an iPhone. You might also experience it during voice calls or with other calling apps.

The static or crackling noise might come from either the earpiece or the speaker, but is caused by the same problem. Generally speaking, this is a sign of damage to the speaker’s diaphragm, which are very delicate due to their size.

The easiest way to determine if it’s a hardware issue is if the noise stops when you use headphones. If it does then you’ve got a hardware issue, which can only be repaired by a phone specialist.

However, if the noise continues then you’ve most likely got a software issue, which can either be temporary or permanent. If it’s only the first time, try closing the app and/or turning off your phone. If it continues, then take it to a specialist for diagnosis.

Among the range of unusual noises that can come from an iPhone, clicking is potentially one of the most worrying. Like crackling, it can be a sign of a bigger issue, but there are a few things to diagnose first.

Where on the phone is the noise coming from? If you’re able to, check where the noise seems to originate. Does it only happen when the screen is on, or when you use the camera? Knowing this will help you to resolve the issue.

It could be as simple as a haptic feedback notification, which is the phone’s way of telling you that you’ve done something. It could happen when you type, when you close an app, or when you use the camera.

Whatever the reason, go through your notification settings to ensure they’re all set to your liking. You can also try turning off the vibrate function in the Accessibility menu, and ensuring your phone is up to date.

If this doesn’t solve the issue then you might have a hardware problem. Clicking sounds can be caused by circuits and boards not connecting properly, effectively making them misfire.

However, this isn’t really a problem you can solve yourself, and you’ll need to get someone to look at it. Alternatively, if it’s not too much of a bother then you can carry on, or use it as an excuse to upgrade to a newer model.

Having a built-in alarm on your phone can be incredibly useful, but many people find themselves asking, “Why do I sleep through my iPhone alarm?” While there might be many reasons for this, it does lead to the bigger question, does iPhone volume affect the alarm?

There are 2 different volume settings on an iPhone: notification volume and ringer volume. Your iPhone alarm is linked to the ringer volume, and so if this is turned down then your alarm won’t be very loud. Simply solve this by turning up the ringer volume before you go to bed.

It’s also worth bearing in mind, however, that the alarm will still go off in silent mode, but it needs volume to do this. Putting your phone on silent before you go to bed means you won’t be woken up by calls, even if your ringer volume is set to maximum.

To adjust your ringer volume, simply use the volume control on the side of the phone. Alternatively, you can adjust it in Settings, Sounds & Haptics, in which you can change the slider to full.

While random iPhone alarm sounds might be the SOS function mentioned above, it could also be related to another issue. One common issue is if your phone has all-day reminders set, which might chime every hour or so.

Go to Settings and then to Reminders, and turn the setting off if it’s on. Alternatively, try turning off sound only notifications, as discussed in point 2.

There are plenty of alarm and noise issues to be found on iPhones, but they’re often because a setting has been chosen without you knowing, possibly during an update.

However, if you’ve been through the standard options and are still having problems then it could be a sign of a bigger issue. If this is the case, then don’t hesitate to take it to an approved phone engineer.