Stud walls are the most common type of interior wall. While they’re quick and easy to put up, they’re really not very soundproof. Luckily, it’s possible to soundproof a stud wall, although it will take a bit of DIY knowledge.

The simplest way of soundproofing a stud wall is to isolate each side of the wall and add lots of mass. To soundproof a stud wall effectively, it’s best to rip it down and rebuild it completely, although you will get results from less invasive methods. 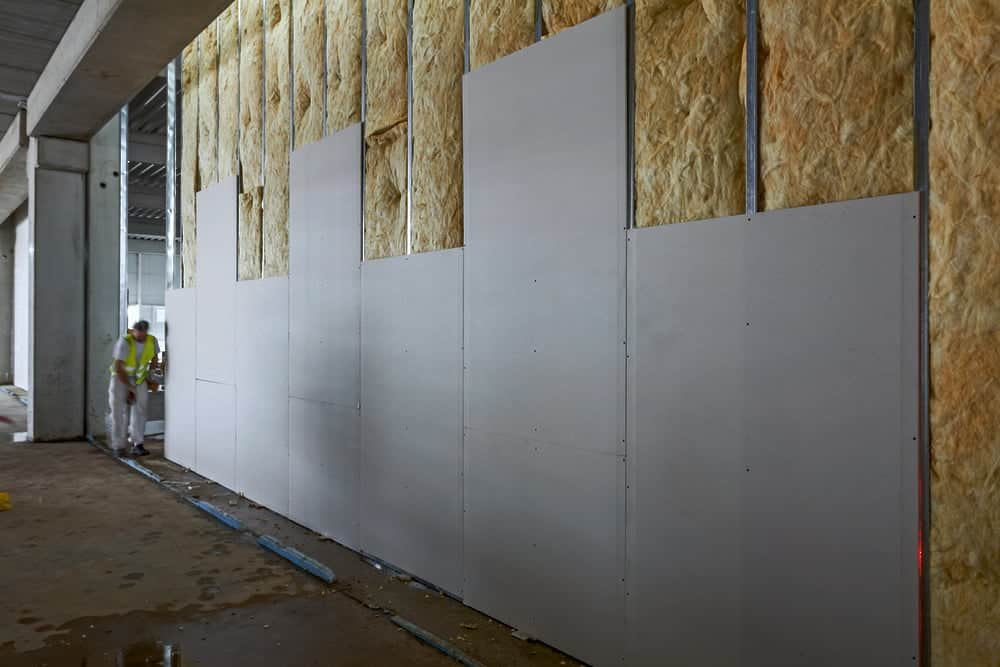 While my guide to soundproofing a stud wall is relatively simple, you will need some construction knowledge and the necessary materials.

If you feel this is outside of your ability but you’re serious about soundproofing, consider hiring a contractor, although this will cost more money.

In this article I cover a simple guide to soundproofing a stud wall, along with the science behind why this is so important and the best ways to do so.

The Science of Soundproofing a Stud Wall

Stud walls consist of vertical wooden planks (the studs), which have a sheet of drywall on each side. Most stud walls will have an empty cavity between the two sheets of drywall, while some might have fiberglass insulation.

Sound waves, from both airborne and impact sources, enter the wall cavity quite easily through the drywall. Once inside this sealed cavity, the sound waves can echo and become louder. This is known as the drum effect.

The first principle to soundproofing a stud wall is adding mass. Mass helps to absorb the sound waves and will block them from travelling through the wall. There are various ways to add mass to the stud wall, and I’ll cover these in more detail later.

The second principle is decoupling. This basically means isolating each side of the wall so that it’s harder for vibrations to pass through. One option, for example, is to fit the drywall to staggered studs so that each side acts as a separate wall. This is one of the most effective methods of soundproofing a stud wall, but also the biggest project.

To know more about staggered studs and how it will help you in soundproofing, read my article.

The final relevant principle is sound dampening. This is achieved through insulation, which reduces reverberation, meaning sound waves can’t echo. Similarly, adding insulation increases mass, and also means there are fewer flat surfaces for the sound waves to bounce off.

This is basically all the science you need to know for effectively soundproofing a stud wall. Combining these 3 principles will increase sound absorption while also treating any noises that make it through the barrier. All of these principles are used in my simple guide below.

Methods of Soundproofing a Stud wall

There are 2 main ways to soundproof a stud wall: soundproof an existing wall or build a new one.

If you’ve got the time and the budget then I’d recommend building a new wall from scratch because this will allow you to use the best soundproofing solutions. However, if you don’t have the option of ripping the wall down, you can definitely improve an existing wall.

We’ll start with soundproofing an existing stud wall because this will probably be the best option for most people. Just be aware this does still involve ripping down half the wall, so be prepared to get messy!

Start by ripping off one side of the drywall. It doesn’t really matter which side, but I’d recommend working inside the room you want to soundproof because you’ll likely be adding more drywall later.

Next, fill the cavity with insulation. While standard thermal insulation, such as fiberglass or recycled cotton, will work, it’ll be much more effective to use acoustic insulation.

Check out my top recommendations for insulation materials.

Replace the original drywall with a new piece, or with some acoustic plasterboard if you can afford it. Next, we need to add more mass to the walls, as this will help block sound waves.

The cheapest option is to add more drywall, which will make some difference. However, drywall isn’t very dense, and if you’re wanting your room to be as soundproof as possible, then you might as well try something else.

Instead, try a double layer of mass loaded vinyl or vehicle sound deadening mats. Both of these products are made from incredibly dense materials that aren’t too thick, meaning you get much more out of them without taking up too much space.

The easiest way to fix this to the wall is to build several small wooden frames and then hang these on the wall. This will be easier than trying to attach mass loaded vinyl (like this one on Amazon) directly to the wall, and screws will stay in much better if screwed through wood.

The trick with this method is to just add as much mass as possible. If you can’t get away with decoupling your stud wall, then adding mass is your only option. However, it’s worth remembering that you are going to lose space in your room, so just find the right balance.

As I’ve mentioned, building an entirely new stud wall will be the most effective option for soundproofing. Building from scratch will allow you to isolate each side of the wall, thereby massively reducing vibrations into the wall cavity.

Decoupling means you need to have separate studs for each side of the wall. This effectively creates a void between the two sides, which stops sound waves from passing through. However, this will involve a major structural change to your property, so make sure it’s safe to do so.

To properly decouple a wall, you can either build 2 stud walls or a staggered stud wall. Building 2 stud walls is just that: you have a set of studs for each side, and both are separately sealed and insulated. This creates a tiny cavity between 2 distinct walls, and is the most effective option for soundproofing.

The alternative is staggered studs. This option is easier and needs fewer resources too. You still have 2 sets of studs, but they’re staggered, meaning you still only have a single stud wall. While this option is much easier to build, it does still mean you’ve only got one cavity, so sound waves can still pass through the wall. 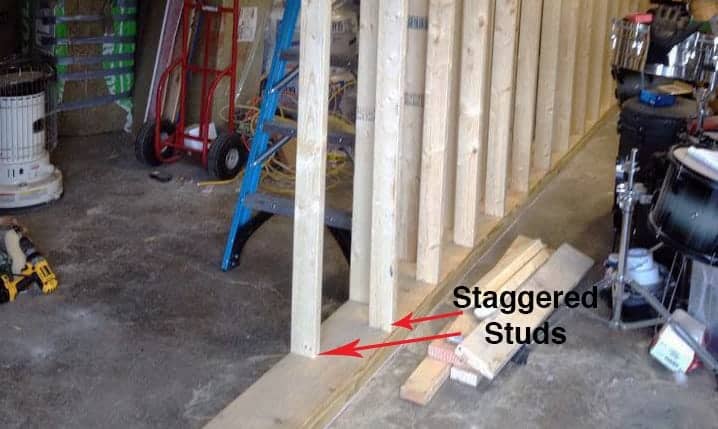 Another option, instead of separate studs, is to use resilient clips and a hat channel. Using these 2 products basically creates a flexible channel under one side of drywall, which will allow it to flex and prevent sound waves from passing through.

Isolation strips are designed to sit under wall partitions and on top of wooden joists. They’re made from rubber and prevent vibrations from passing through the structure. These make a massive difference to the amount of noise that can actually pass through a stud wall.

If you’re building your stud wall using a frame rather than assembling from scratch, I’d always recommend choosing wood over metal. Most importantly, wood absorbs sound much better than wood, and is also easier to work with, which is helpful considering the amount of things you’re going to be attaching.

Once you’ve got the studs in place, it’s time to move on to insulation. Much like soundproofing an existing stud wall, the key here is to add as much mass as possible inside the wall cavity so it’s harder for sound waves to reverberate.

It’s also worth including some other sound dampening products inside the wall, such as acoustic sealant. Fill every gay possible with acoustic sealant, including between studs and joists, as this will add another level of soundproofing to the structure.

Finally comes the mass. Your options are the same as those listed above, although if you’re building a stud wall from scratch then I’d consider making the addition of mass more permanent.

The best way to do this is to use mass loaded vinyl on top of a piece of drywall, and then cover it with another sheet of drywall. Obviously this means your wall will be pretty thick, but it’ll also be pretty soundproof.

The simple guide for soundproofing a stud wall is to add all the mass you can. However, if you’ve got the resources, it’s much more effective to rip the wall down and rebuild it.

I’ve found that decoupling makes the biggest difference to airborne and impact sounds, but obviously takes a bit of skill and time. Whatever option you choose, it’s possible to make a big difference to a stud wall’s soundproofing.

Thanks for reading! Check out my top recommendations for soundproofing.