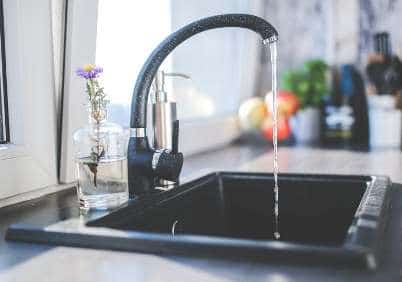 Stainless steel kitchen sinks are very popular thanks to their low cost and maintenance.

But the cheaper ones can be very noisy. That is why there is a need to soundproof that kitchen sink.

The low costing stainless steel kitchen sinks are made of a very thin material which will cause them to be noisy when you run the tap or wash utensils in them.

The noise can be really annoying when you’re watching your favorite TV program. In this article, I’ll touch upon some of the ways you can soundproof a kitchen sink.

How to Soundproof a Kitchen Sink

There are different ways to deaden the sound that kitchen sinks make. It is the underside of the kitchen sink that you will be treating.

You can soundproof a kitchen sink with the help of the following materials which will reduce the sound clutter to a large extent:-

Mass loaded vinyl is a very popular material for soundproofing. What makes it unique is that it has a lot of mass and is yet flexible.

For a noisy sink, the best way to deaden sound is adding mass. With the addition of mass, the vibrations created when utensils are dropped in the sink or when high pressure water is run over it, are damped.

Mass Loaded Vinyl is not cheap but for a kitchen sink, you may not need much of it. Though it is preferable to deaden the entire underside, you can save on costs by leaving the side portions.

A 40 square feet (4’ x 4’) mass loaded vinyl by Trademark Soundproofing is available on Amazon for about $100 and should be enough for soundproofing a kitchen sink. And it is heavy weighing one pound per square foot.

However, for larger sinks, you will need more materials and this would entail higher costs.

How to Use Mass Loaded Vinyl to Soundproof a Kitchen Sink

Measure the size that you will need for your kitchen sink and cut it with a utility knife. The center portion will have a circular cut through which the drain pipe will go. See the image below.

Clean the underside of the sink and make sure that is dry and free of dust. You will need to do this before you apply the adhesive.

Now that you have the mass loaded vinyl cut to size and the underside of the sink clean and dry, it’s time to apply the adhesive.

The type of adhesive is important. A good choice is the 3M super 77 which is available on Amazon.

Lay the sink upside down. Also, lay down the mass loaded vinyl on a flat surface. A table or floor should do fine. It is advisable to place cardboard in between to protect the table or floor from the adhesive spray. 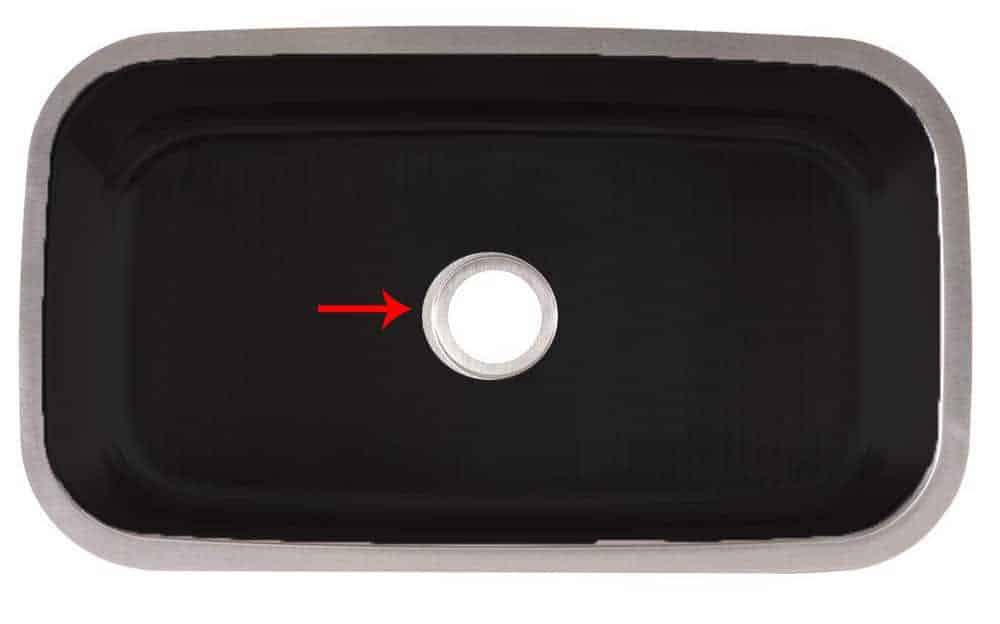 Arrow indicates the circular cut for the center of the drain pipe.

Allow the adhesive to set and there you have it, a soundproof kitchen sink.

The procedure covered above is for a sink which is not yet installed. For an already installed sink, you can cut small pieces of the mass loaded vinyl and apply them one by one.

A slightly cheaper option would be sound deadening mats that are used in cars. They’re not as good as mass loaded vinyl but are a cheaper option.

In most cases, these will do for deadening the sound of a kitchen sink. After all, you just want to make things less noisy.

For a kitchen sink, I would suggest going for the cheaper yet reasonably effective one such as the Noico (available on Amazon). However, I have an article on the best sound deadening product which you can check out.

The procedure to install the sound deadening mat is very similar to that of the mass loaded vinyl with a few minor differences.

How to Soundproof a Kitchen Sink Using Sound Deadening Mat

The first step is measure and make the necessary cuts for the mat to be installed on the underside of the kitchen sink.

Lay down the sink and the sound deadening mat as described earlier.

Sound deadening mat used for cars generally have an adhesive backing. But, you will not want to take any chances.

So, after removing the backing, use the 3M adhesive spray on the mat and the portions of the sink on which you are going to stick the mat.

Allow the adhesive to set and your task is done.

A quick and effective way to deal with a noisy kitchen sink is to apply some rubberized undercoating spray.

This is another product which is primarily used for preventing corrosion of vehicle parts such as undercarriages and parts of fenders and hood. But it is equally good at deadening sound and can be sprayed on the underside of the sink.

This is a great solution for already installed kitchen sinks because it is much easier to spray on them as compared to sticking mass loaded vinyl or sound deadening mat.

Here is a video on how this is done.

How to Soundproof a Sink : Home Sweet Home Repair
Watch this video on YouTube.

The spray that I recommend is the 3M 03584 Professional Grade Rubberized Undercoating (Amazon link).

Roll up some newspaper and plug into the gaps of the kitchen sink. This is to make sure that you don’t run into blockage problems.

Lay out newspaper or cardboard in the spraying area in close proximity to the sink for protecting the walls and floor.

Keep a gap of about six inches between the can and the sink. And spray.

Allow the spray to set and then only remove the newspaper or cardboard that you had placed earlier.

An alternative to mass loaded vinyl and sound deadening mat would be to rubber sheets. You can get this either from left over roofing or an old tire tube.

Procedure for install would be identical to that for mass loaded vinyl.

The best tip would be to get a non-metallic kitchen sink which will be less noisy. The ceramic ones can be really expensive, so you can go for something in between like a granite sink.

If you have the budget only for metal sinks, it is best to go for ones that have been treated for noise reduction. There are sinks available which are coated on the underside at the factory itself with sound deadening material which saves the headache of DIYs.

If your sink has two basins in a singular unit, it will be quite noisy. The space in between on the undersigned acts as an echo chamber. This space can be plugged with foam spray which will improve things. Expanding foam can be messy though, so you need to be careful while applying. After you’re done make sure to cut off the excess foam with a knife.

If you are sticking something like mass loading vinyl, sound deadening mat or rubber for reducing noise from you kitchen sink, make sure that the adhesive bonding is strong. As the material would be stuck on the underside of the sink, it will always be fighting gravity.

A noisy kitchen sink can be a real pain. But, soundproofing it is no big deal and can be done without spending too much.

It is best to replace the sink but if that is not possible, then any of the methods mentioned above would improve the situation.

In my experience, mass loaded vinyl works the best owing to the amount of mass they have. But, if you’re only looking to improve things a bit, then any of the cheaper options would serve you well.

Thanks for reading! Before you go, take a minute out and check out my top recommendations for soundproofing products.