As one of the busiest areas in any building, stairwells are home to plenty of noise. Whether you live in your own home or a shared building, you might be wondering how to soundproof a stairwell. Here are a few steps: 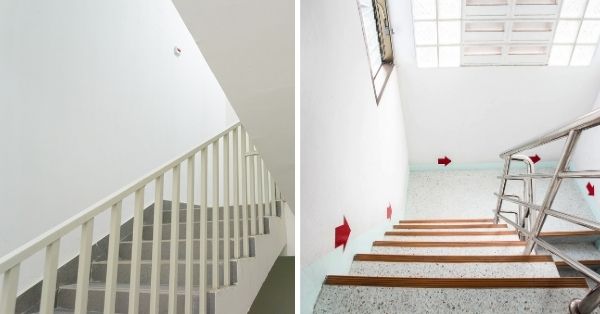 In this article, I’ll look at why stairwells are such a problem when it comes to noise pollution before going into detail about the steps mentioned above.

Also read: How To Soundproof A Loft Bedroom

Why are Stairwells so Bad for Noise Pollution?

In residential buildings, stairwells are usually closed in to an extent. This differs from commercial spaces where stairwells can often be freestanding or fairly open.

But the interesting thing about stairwells is that, while they’re closed in, they also have to be quite open.

By this I mean the landings at the top and the bottom of each flight, along with the physical empty space around the stairs that has to extend across 2 or more floors of a building.

In short, stairwells are a soundproofing nightmare for one simple reason: reverberation.

Also known as reverb, this is the acoustic phenomenon of sounds bouncing off a reflective surface, such as a wall.

Reverberation is the term used for a sound persisting after the source has finished. For example, sound waves reflecting multiple times off multiple surfaces.

It can often be perceived as a continuous sound rather than distinct acoustic events.

This is where it differs from echo. Echo is when a sound wave can be heard twice or more as separate, and gradually quieter, sounds.

For example, an echo is the traditional ‘shouting into a canyon’ idea: you hear your voice multiple times as distinct sounds.

Reverb, on the other hand, would be like running up a staircase and it sounding like there are 10 of you doing it. The sound waves cross over each other and become difficult for your brain to understand.

I touched on the reason why this is such a problem in a stairwell above. The main issue is all the open space around the stairs, even if they’re relatively closed in.

But the other problem is the amount of reflective surfaces you’ll find in a stairwell.

Almost all surfaces have some capacity to reflect sound waves, but some are much more effective than others.

Generally speaking, the harder, smoother and flatter a surface, the better its reflective capacity.

Some of the best reflectors you’ll find around the home include:

As you can see, these are all fairly common materials (to greater or lesser degrees) in a stairwell. It’s easy to see why sound reflection is such a problem in this kind of space.

How to Soundproof a Stairwell

Before getting started on the steps mentioned above, perform a careful inspection of each stair for any signs of damage.

If any squeak or creak then you need to address this before you start soundproofing them.

Doing so is simple enough: nail them back down. You can also seal the gaps with acoustic caulk, but I’ll cover this shortly.

The first step should be to dampen the stairs to reduce the amount of impact noise.

Impact noise is a particular problem with hardwood stairs or bare materials such as concrete or stone.

Installing some dampening materials is an easy way to reduce this problem.

The most obvious option is to fit some carpet, the thicker the better.

But you’ll also want to fit a springy and dense material underneath for extra dampening.

I’d recommend either using acoustic underlay (Amazon link) or cork tiles (Amazon link). Both of these products will do the job well.

Alternatively, if you really want to go all out, use some vehicle sound deadening mats. These are a real hard-hitter when it comes to sound dampening and have the advantage of being self-adhesive.

If you already have carpet fitted on your stairs, I recommend pulling it up and fitting one of these materials underneath.

But if that’s not an option, lay some carpet or rug over the top of the existing carpet.

2. Insulate under the stairs 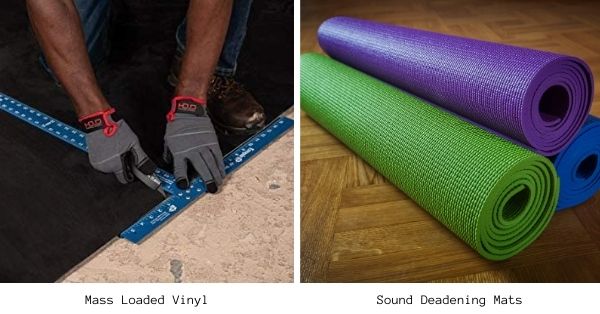 One way or another, hopefully, you’ll have access to the underside of the staircase. Installing some insulation here will make a massive difference to the level of sound transmission.

Essentially, you’ll want to replicate the process of insulating and decoupling a wall, but with the underside of the staircase.

To do this, you’ll need some materials:

The method is as follows:

The purpose of this is to add a lot more mass to the staircase’s structure. This will help to reduce its ability to vibrate simply by making it heavier.

Adding a layer of mineral wool insulation helps to absorb any sound waves that do pass into the structure, meaning you have the best of both worlds.

If you have access, I’d recommend repeating a similar process on any landings too, although they might already be properly insulated.

To take it one step further, you could use resilient clips and hat channels on the outer layer of MDF. These provide the structure with more flexibility, which helps to absorb sound waves.

As I mentioned above, the walls in a stairwell are usually perfect for reflecting sounds. But they also allow sound waves to transmit into rooms or properties around the stairwell, which is a problem in itself.

Soundproofing a wall is a fairly simple process, as the large flat surface area is easy to work with.

Your main aim is to again add lots of mass to the walls to reduce sound transmission. There are a couple of options for this:

Drywall is probably the most accessible product and the easiest to work with, but doesn’t have much mass on its own.

Try combining it with either mass loaded vinyl or sound deadening mats for best results.

The easiest way to do this is to stick the high-density material on the rear side of the drywall before you install it.

This way you’ll get the benefit of the soundproofing product but still have a surface that’s easy to decorate.

You could also use resilient clips and hat channels (Amazon link) onto which you can hang the new layer of drywall.

Bear in mind this’ll be more effective if you fit some insulation behind the drywall, although this could take up too much space in a stairwell. Consider how much space you actually have to work with in the stairwell before planning this.

Hopefully by installing so much mass in the structure we’ll have already reduced the issue of reverberation.

But if there are some untreated surfaces then it’ll still be an issue.

Luckily it’s a fairly simple thing to solve. For this you’ll want to use acoustic management materials rather than soundproofing products.

The aim isn’t to block sound as such, but to instead reduce its ability to reflect off hard and flat surfaces.

To do so you’ll want to look at products such as acoustic foam and bass traps.

These products have an open-celled structure that allows sound waves in but makes it difficult for them to escape again. The sound waves expend their energy moving the material’s fibers and are converted to heat energy. This effectively “absorbs” the sound waves.

In order to make this as effective as possible, I recommend trying to find the stairwell’s first or early reflection points. Placing sound absorbing materials here will almost completely remove the issue of reverb.

You can watch this video for more information on how to find a room’s early reflection points.

If you don’t have access to acoustic foam, your other options include furniture on the landings or heavy curtains on the walls. Neither of these will be as effective though.

I hope this guide has given you some information on how to soundproof a stairwell. It’s worth covering all the steps above for best results, although this’ll largely depend on how bad the noise problem is in the first place.

Just remember to focus on both the stairs and the space around them in order to effectively reduce sound transmission in the stairwell.