We are all beginning to love drones and they are becoming a regular part of our lives. Kids love them for flying around the yard. Companies love them for many reasons.

In fact, drones are pretty much one of the most interesting and versatile inventions that we have today. I love drones and there are so many of them.

Drones can fly in many different ways, they have ultra HD cameras and are equipped with long-lasting batteries that can allow a quadcopter to fly further, faster and longer than ever before. Simply put, quadcopters are among the most useful unmanned vehicles that you have right now.

Check out my favorite quadcopter on Amazon. 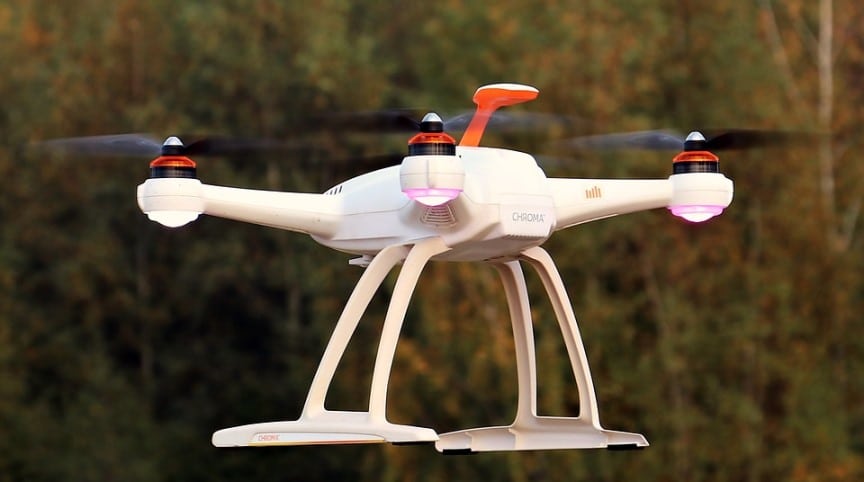 One of the issues with drones is that they contain a lot of electrical parts that vibrate a lot during their normal operation. This results in a lot of noise which can be quite annoying.

Just like the way a jet liner makes a lot of noise through the engines, the larger a drone is, the more noise it is likely to make during its operation.

You can’t find a silent drone in the market but there are a number of new models that get close to being really quiet. As I said before, the vibration that makes the sound is necessary to keep the quadcopter in the air.

The military has tried to see if they can make really stealth drones, but I doubt you can find anything close to that in the store.

Most of the revolutionary technologies for drones and their design are mainly top secret and used by the military to gain an edge in global warfare. Don’t expect them to be in stores anytime soon.

This means that you have to try to make yours as quiet as you can so that you can use it for things like monitoring animals which requires them to be quiet.

Also, if you are shooting a video with the drone, the noise of the drone motor and propellers can drown out all the sound that you are trying to achieve.

A truly quiet drone will help you to do this kind of things even better, better videos and media content from any distance, no matter how fast the drone is moving.

How To Make Your Quadcopter Quiet?

If you are looking to make your quadcopter silent, a good approach is via the hardware standpoint.

By focusing on different components of the device, you can significantly reduce the amount of noise that comes from your quadcopter.

Below are some useful points on how you can reduce the noise from your drone to the barest minimum:

1.  Reduce The Noise Coming From The Propellers Of The Drone

Nowadays manufacturers are using advanced aeronautic computer software to design new propellers that will have the most silent acoustic signature.

After several rounds of testing and development, Northwest UAV developed a type of propeller that looks like a bat wing and is really silent. Read this article by UAS Vision.

A typical example of how propeller blade design can affect sound is the Mavic Pro Platinum (see it on Amazon) which was one of the first quadcopters to use DJI’s newly redesigned propeller blades. 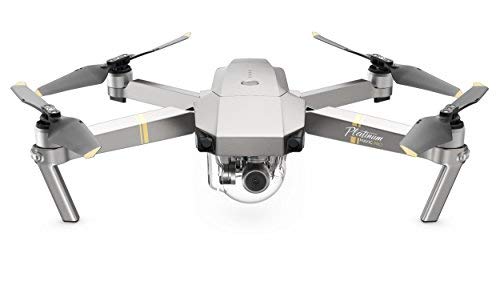 They included a new “raked wingtip” that was able to reduce noise by as much as 60 percent compared to the previous models that DJI made. Imagine how much slower your quadcopter can be if you are able to drop the noise level by as much as 70 percent simply by replacing the propellers with a newer, more acoustic friendly design.

2. Reduce The Noise From Main Rotors

I was watching one of my neighbors fly his quadcopter and I noticed how silent they ran. Electric motors are great at being more silent nowadays.

New designs also include revolutionary blade designs that further contribute to the drone being way more silent that from other older generations.

For most quadcopters with electric motors, chances are that most of the noise from the device will come from the main rotors. If the noise bothers you a lot, then you can find a simple motor glider and install it around them.

This will make your quadcopter practically silent when you operate it at slow or medium speeds. Normally, if you combine that with other ways of making quadcopters silent, you will be able to capture better videos.

See the video below:

Dropping a Glider from a Drone!
Watch this video on YouTube.

Dotterel Technologies introduced a new method of reducing drone noise. They used shrouds made of nano-fiber sound dampening materials to capture most of the drone motor sounds and direct them upwards. This also protects the fan blades from objects, so it works in two different ways.

This has proved to reduce noise of quadcopters by as much as 6 decibels! The company is looking to increase this acoustic effect to a further reduction of 10 decibels to make drones even more quiet!

This technology allows them to have drones that are near silent even at 500 feet above sea level.

Spinning slowly means lower decibels from motors, lower sound frequency levels and much easier camouflaging of the sound by the background.

If you are building a quadcopter yourself, putting together these components above can lead to a significant reduction in the amount of noise that you will get at the end of the day.

Drones are nice but silent drones are much better. If you are looking to have nice audio on your drone videos or use your drone for activities that require stealth, then this article should help you achieve the silent drone you’ve always wanted.

Drones and How They Work

A drone is a small version of a helicopter with a camera attached to it. So, if you see one of this flying around your environment, you can be sure it’s a drone.

Drones are referred to as unmanned aerial vehicles or UAV. They are flying devices that operate either via remote control or autonomously. Nobody needs to be inside a drone to make it fly well. It simply needs the system, connections and the remote control system to function properly.

Some drones have factory-fitted camera systems while others do not. Whether it has a built-in camera or not, drones are used typically in many industries with extreme levels of flexibility, depending on how silent or powerful they are.

Here are some important uses of drones today that you can enjoy or consider when investing in one:

Police and law enforcement agencies are seeing great adoption in the use of drones as part of their patrol force to carry surveillance and assist them in the crime fighting operations.

Drones are also particularly useful in combating crime, domestic terrorism and helping the police with their investigations

An example is in Africa where drones are being used for transporting blood from blood banks to hospitals in war zones.

In a wider sense, drones are finding use in the military right now for target practice, attack and in mine removal exercises.

The market is also increasing for remote reconnaissance, target practice and troop monitoring. This is part of what I am saying that drones are being used in many more areas now than before.

Photography and drones have recently become an inseparable pair in such a way that one of the most common uses of drones now is as a photography tool.

Many people are trying their hands at photography and drones make it easy to get it done with little effort. However, a lot of drones come equipped with action cameras that are light, versatile and easy to operate.

You can also document events and activities with the help of different accessories.

Professions such as archaeology and ecology make use of drones to assist in areas of disaster relief efforts, anti-poaching monitoring, animal conservation efforts and even monitoring areas that are prone to pollution as an early warning system.

This is also important in areas that are polluted and being remediated to ensure that progress is closely monitored and reported accordingly.

Basic Features of The Quadcopter 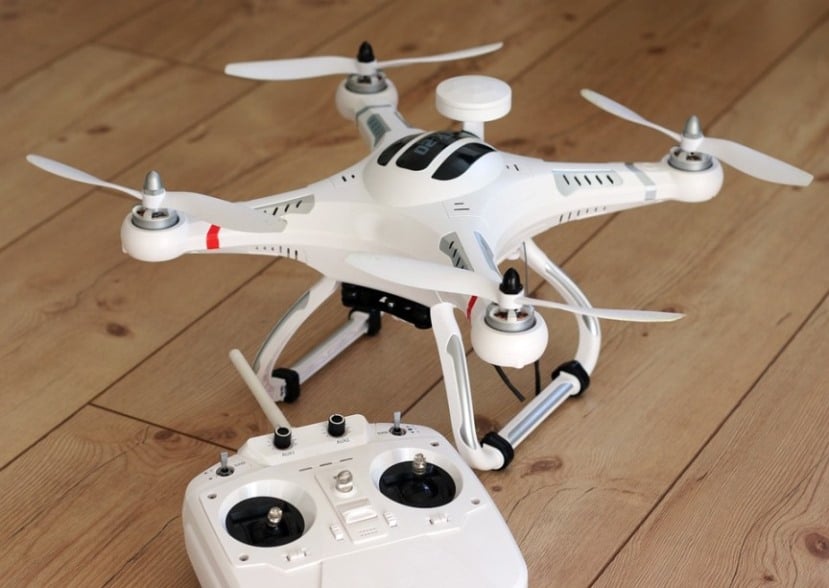 A quadcopter is a kind of drone that looks very much like a helicopter. What distinguishes it from drones is its four rotors which is why it’s sometimes called a quadrotor.

A pre-programmed onboard computer remotely controls a quadcopter. It’s a device that has exceptional balance because of its blade movements and not through its tail rotor usage.

Because of their useful applications and great balance, quadcopters are used by many individuals these days making it the most recognized drone used.

Aside from being used for photography, there are other uses of the quadcopters:

You can use your quadcopter to make light deliveries to your neighbors and friends around your vicinity, cutting off the stress and time required if you must make such deliveries in person.

Drones have various advantages, but can something this good have a wrong side?

Yes, drones have their disadvantages too.

Aside from having to worry about troubleshooting primary malfunctions, another aspect drone owners are worried about is the drone noise.

These devices come in handy, but wouldn’t it just be perfect if it remains unnoticeable?

I personally spend a lot of money to make sure that I have the best of all gadgets, whether a laptop or a smartphone or anything else that I use in my daily work or play. Drones today are tied into this gadget ecosystem and there are also many more ways to get the best use for them.

Besides, we have more people getting into photography and video-making, which is why manufacturers are making more cameras and video recorders to meet the market demand.

Action cameras have quickly gained popularity because of how convenient these devices are; they are very light and highly versatile. Making use of heavy cameras for documentation is not required anymore with the introduction of the action camera as these also come with various accessories.

Another point to action cameras is that they can be connected to drones for more dramatic images and videos. We all know what drones and quadcopters are but it is worth a refresher before we go into how to make them even more efficient than they already are.

If you’re considering buying your drone, specifically a quadcopter, you have to take into consideration the fact that these devices may be noisy.  The original purpose of using cameras on drones is to get a better comprehensive view in monitoring an area.

Buzzing sounds recorded on videos should not be a cause of concern for owners, but if the noise of the drone disturbs you, the methods listed above should help keep your drone quiet.