Ceiling fans are a great addition to the home if you don’t have air conditioning, but what can you do if your ceiling fan is making noise? Luckily there are quite a few solutions you can try, but here’s a quick answer:

If your ceiling fan is making noise then the first thing you should do is make sure it’s working properly. A noisy ceiling fan could be a sign of loose screws or worn connections, but providing these are fixed then the next thing would be to isolate it from the ceiling using soundproof materials. 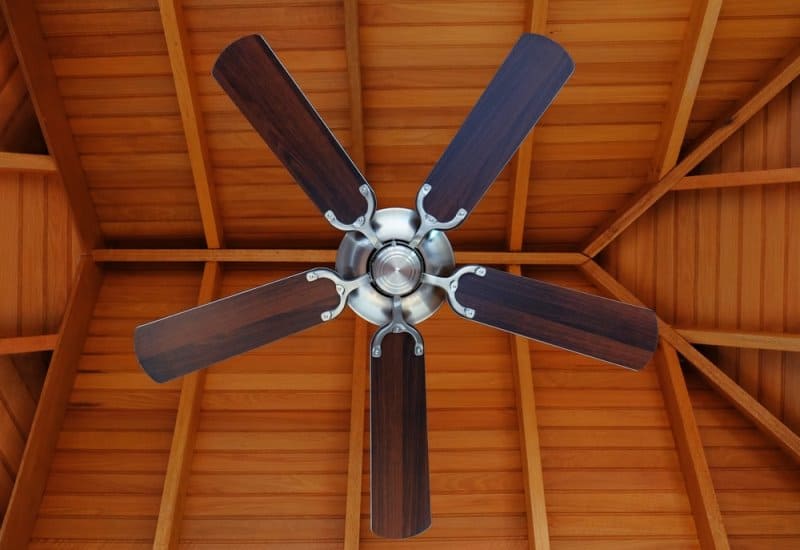 In this article, I’ll look at some of the most common reasons for ceiling fans to make noise, along with how to fix them and how to soundproof the ceiling fan to ensure it doesn’t make unnecessary noises in the future.

Before moving on to the best ways to soundproof a ceiling fan, it’s worth looking into what the noises might mean. A ceiling fan will always make some kind of noise, even if it’s just the blades sweeping through the air.

However, new or strange noises could be a sign of a larger problem that requires attention. I’d definitely recommend making your way through this list to ensure your fan is working normally before you move on to soundproofing it. Here are the main causes of ceiling fan noise along with what they mean.

One of the most common noises from a ceiling fan is rattling, which can also be one of the most worrying. As with other electrical devices, rattling is usually a sign of something having come loose, and so should be fixed straight away.

Alternatively, a rattling noise could be caused by loose wire connection inside the switch; the noise is simply the wires rattling around because they’re not securely held in place.

Either way, you should look to fix this problem pretty quickly. Rather than trying to identify which particular screw is loose (although you can do this if you want), it’s generally much easier to just tighten them all.

First things first, ensure the fan is turned off. If you’re going to be checking wires and the motor, then make sure it’s turned off at the mains too, otherwise, you might electrocute yourself.

When it comes to tightening the screws, refer to the instruction manual. Most ceiling fans will follow the same general structure, but there might be some particular design features you need to be aware of. This YouTube tutorial should give you all the information you need about tightening the screws.

This is because sound waves cause vibrations, and the movement of the fan can cause plenty of vibrations. When these travel into a solid structure like a ceiling joist, they can become amplified and will travel much further.

There are a number of ways you can solve this problem, but the main thing is to isolate the fan from the ceiling, much the same as how you’d decouple a wall to soundproof it. However, I’ll go into this in more detail later.

Dimmer switches are a fairly common way to adjust the brightness of a light, but they’re also used on ceiling fans. Dimmers work by changing the voltage of the electrical supply, which changes the intensity of the light.

However, if you’ve ever used a dimmer with an energy-saving light bulb then you’ll know the kind of issues they can cause. This is exactly the same with ceiling fans and often results in a humming sound from either the fan or the switch itself.

The humming is caused by the circuit vibrating as a result of changes to the voltage. It’s generally not a hazard, although it can become one in houses with old wiring. The bottom line is that dimmer switches aren’t designed for ceiling fans, which require more power than a light bulb.

The simple solution is to replace the dimmer switch with a proper ceiling fan speed control (Amazon link). These really aren’t expensive and they’re pretty easy to install yourself.

Another possible cause of a humming noise is a faulty receiver for a remote. Much like the dimmer switch, humming from the receiver is caused by problems with wiring and connection, and is effectively dirty electricity.

The easiest way to resolve this problem is to remove the receiver and connect the ceiling fan directly to the mains power supply. Of course, this means you won’t be able to use the remote, but that’s where the speed control switch mentioned above comes in.

If your ceiling fan is fairly new then this shouldn’t be an issue. If you think it is, it’s worth contacting the manufacturer if it’s still under warranty, as they might be able to come and fix it for you.

However, if you’re just going to change it then watch this video on how to rewire a ceiling fan to mains electricity. It’s not a complicated job, but obviously make sure your mains power is turned off first.

The final thing that can cause humming or buzzing noises in the ceiling fan is the capacitor. A capacitor is part of the electrical circuit that stores electrical charge. In a ceiling fan, it’s used to regulate speed, change direction, or for another use.

Along with a humming noise, other signs of a faulty capacitor include:

Again, this is a fairly easy issue to solve because the capacitor is often one of the first things to wear out. This YouTube video will tell you all you need to know, as most ceiling fans have essentially the same component in them.

However, bear in mind that some ceiling fans will contain several capacitors for different purposes. It might be difficult to work out which one is faulty, so I’d recommend either replacing them all or calling a professional.

How to make your ceiling fan quieter 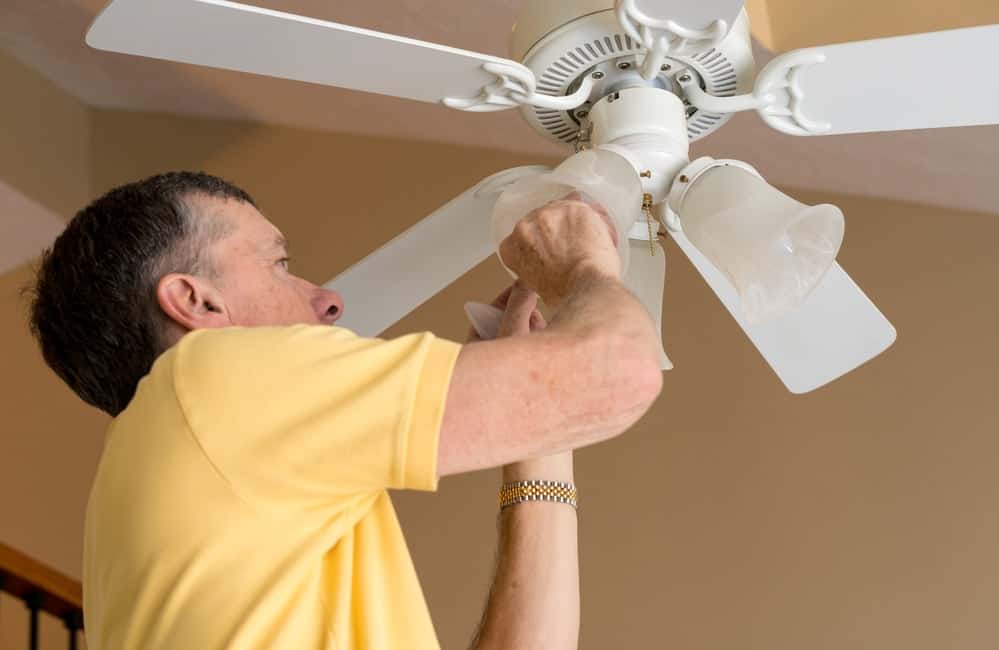 Providing you’ve gone through the list above and checked that your fan is working correctly, there are some things you can try to make it quieter. Obviously bear in mind that a ceiling fan is never going to be silent because the blades will always make noise.

Also, if you feel any noises your fan is making are worth checking out, then call a professional. This is particularly true if components seem hotter than they should be, you see sparks or smell burning. Ensure you get these problems corrected as soon as possible.

So here are my top tips for making a ceiling fan quieter. There’s not loads you can do in the way of soundproofing, but I’ve adapted some of my favorite solutions to fit the problem.

I can’t stress this enough: never overlook regular maintenance of your ceiling fan. This is arguably the best way to catch any problems before they become too big, and inspecting it regularly will help to prevent the worst problems.

First, always start with your fan turned off. Stopping a fan suddenly can damage the motor and throw it out of balance, which leads to a number of the issues listed above.

Start by dusting the blades or wiping them down with a damp cloth. How can this make it quieter? If dust manages to get into the motor or housing it can lead to a number of issues. So a clean fan is a working fan.

This is also a good time to tighten the screws and inspect for signs of damage. Most screws will only need around 1/8th of a turn, particularly if you’re checking them regularly.

Finally, lubricating the motor is never going to hurt. You might need to take the fan down to reach the motor, or you can just squirt some lubricant in through the gaps and hope for the best.

2. Isolate the fan from the ceiling

Much like decoupling a wall, the best way to prevent vibrations from amplifying through your ceiling joists is to isolate the fan. Doing so means that any vibrations caused by its movement dissipate before making their way into the solid structure.

Ensure you buy a support that works for your ceiling fan, and obviously you’ll need to take the fan down to re-install it. Luckily it’s not a particularly complicated job, as this video shows, but you will need some DIY knowledge.

A ceiling fan can become unbalanced for a number of reasons, and if left unchecked it can gradually become worse and worse. It usually leads to a squeaking noise as unnecessary stress is put on the motor, but this can lead to other problems.

The solution isn’t particularly complicated but does take some time, as it requires constant checking to get it right. Firstly you’ll need to buy a ceiling fan balancing kit (Amazon) but these really aren’t expensive.

The kit contains weights and a clip that allow you to get everything back to where it should be. As I said, the job isn’t difficult; it’s just long-winded because you have to do this for every blade.

I’d recommend using this video to understand how to rebalance ceiling fan blades because it explains everything very clearly. You should only ever need to do this if your fan is making squeaking noises.

4. Use some soundproofing materials

Another option for making your ceiling fan quieter is to use soundproofing materials in key areas. However, you’ll have to be clever with how you approach this issue because it won’t be as easy as soundproofing a wall, for example.

The best thing I can suggest is to build your own ceiling fan mount or support. Effectively you want to try and mirror the actual device but using soundproofing materials.

When attaching the fan to the ceiling, for example, consider making a small mount from a piece of wood and some acoustic foam. Something like this high-density acoustic foam (Amazon link) would be ideal.

Basically you then want to fit this small acoustic foam pad between the fan and the ceiling joist, screwing the ceiling fan through the pad into the joist. You’ll need longer screws than what may be supplied with the fan, as you’ll have to accommodate the acoustic foam (possibly allow for an extra half-inch).

There shouldn’t be any reason why this acoustic foam pad will interfere with the ceiling fan, and providing it’s screwed in tight enough there should be no extra movement.

The purpose of the acoustic foam isn’t necessarily to soundproof but is to absorb and dampen the vibrations before they pass into the ceiling joist. This should make a reasonable difference to any rattling sounds you can hear elsewhere in the house.

Troubleshooting a noisy ceiling fan isn’t a particularly hard job because it can usually be boiled down to 1 of 5 things.

Providing you’re satisfied everything is working properly, you can try a few soundproofing solutions, but the most successful is definitely just regular maintenance. However, if you have any concerns, I’d recommend calling a professional to look at it.