For best results when soundproofing a wall, I often get asked which is better, soundproof drywall vs. insulation. I’ve done some research to come up with a quick answer: 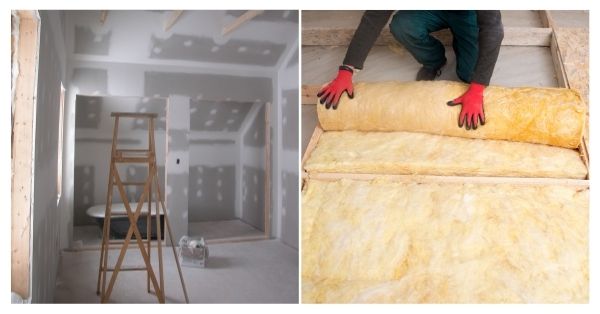 In this article, I’ll go over the key differences between soundproof drywall and insulation. Hopefully, by the end you’ll know which is better for your project, and when to use them.

To an extent, both soundproof drywall and insulation are designed to do the same things. This is primarily:

But both add some level of extra mass to a structure, which is another important factor in soundproofing.

Of course, both products differ wildly in their construction and materials. So while they are comparable, it’s worth investigating them separately for a better understanding.

Soundproof drywall is pretty much what it sounds like: drywall panels with extra soundproofing materials added. Normal drywall is made from gypsum covered in sheets of paper.

To make it soundproof, manufacturers include a layer of sound dampening compound in the middle. Much like Green Glue, it’s a viscoelastic compound that dissipates sound waves.

Insulation, on the other hand, is exactly that: insulation. Generally, the products you’ll come across are designed as thermal insulation, but many have fairly good acoustic insulation properties too.

One such example is mineral wool, which is denser and more rigid than something like fiberglass insulation.

It’s useful against noise pollution because its open and fibrous structure easily trap sound waves, which expend their energy trying to make the fibers vibrate. This is a prime example of sound absorption.

But mineral wool is also useful for sound dampening too. This is the process of dissipating vibrations before they become sound waves.

While soundproof drywall does this through its viscoelastic layer, insulation does it through its open structure. Simply put, the pockets of air make it difficult for vibrations to transmit through the material.

In short, the differences between soundproof drywall and insulation are entirely down to their materials, construction, and application.

However, they perform relatively similar jobs in a soundproofing project, but in different ways. Both are designed to reduce the transmission of sound through a structure.

But I wouldn’t say this really means you can choose one over the other, simply because they’re used differently. If possible, it’s always best to use a range of different products to get the desired results.

We can compare soundproof drywall and insulation in a number of ways to work out which is best in a soundproofing project.

If you’re only able to choose one, hopefully, this will help. Here’s a handy comparison chart.

There are several important points of comparison in this chart. I’ve already discussed the materials above, and that’s not really something we can compare the products on, simply because they’re so different.

Availability is worth discussing though. Insulation materials are commonly available, both online and in DIY stores. This is because they’re used for thermal insulation but happen to have acoustic insulation properties too.

Soundproof drywall, however, is a more specialist product. This means you’ll have to go to a supplier directly, which will often push up the price slightly.

If you’re in a rush, therefore, or don’t have the means to get hold of soundproof drywall, insulation is the better option.

Another relevant point is STC or sound transmission class. STC is a numerical rating of a product’s effectiveness at isolating sounds. The higher the number, the better it is.

However, it’s not as simple as that. STC is dependent on material density and thickness, which is why insulation has such a wide range.

Soundproof drywall, on the other hand, generally only comes in one thickness and uses similar compounds. Its STC is, therefore, more stable.

The STC of a single product only means so much though. It’s much better to look at the STC of a whole structure once all soundproofing measures are in place.

For example, soundproof drywall on its own has an STC of 52, and normal drywall has an STC of 34. Mineral wool can have an STC of up to 55 depending on how it’s used.

If you were to use mineral wool insulation with a single layer of drywall, the STC would only be 42. But if you used a double layer of drywall and steel studs, you could push this up to 55. Using soundproof drywall would make it higher still.

Of course, you’d want to use materials with high STC ratings. But it’s more important to consider how they integrate to produce an overall STC rating for the structure you’re soundproofing.

Insulation is also more effective against a wider range of frequencies. Again, this is dependent on thickness and density, which are 2 properties soundproof drywall lacks.

That said, insulation generally wins in almost all comparison points, making it a better product in a soundproofing project.

How to Use Soundproof Drywall and Insulation for Soundproofing

As I’ve already mentioned, you’ll want to use both products for best results when soundproofing a room.

Along with these, you’d ideally want to use the following:

To effectively soundproof a wall, do the following:

1. Rip off the old drywall

This step is pretty self-explanatory. Take down the old drywall to expose the wall cavity.

Fill the wall cavity with the insulation of your choice, but I’d recommend mineral wool.

Don’t pack it too tightly because it relies on its open structure. It should be padded into place but not compressed down.

Resilient clips are used to decouple a wall, which is one of the most effective methods of soundproofing.

Screw them to the wall joists, roughly 48” apart horizontally and 24” apart vertically.

The hat channels clip into these quite easily, and these are what you’ll hang the drywall off.

4. Install a layer of drywall

You can hang drywall off hat channels as you would off wall joists. Just be careful to use the correct screws. They need to be long enough to reach the channels but short enough to not penetrate the wall joists.

This step isn’t completely necessary if you’re fitting hat channels and resilient clips, as these are quite effective.

You could either skip this step or that one depending on your desired method. Of course, you could do both, but the results won’t be significantly better.

Adding mass makes it more difficult for the structure to vibrate, and mass loaded vinyl is ideal for this.

Squeeze a layer of Green Glue onto the drywall – roughly 2 tubes per sheet. Wait 15 minutes for it to begin curing then add the MLV.

You’ll need to fix this in place using nails or staples, as Green Glue isn’t an adhesive.

Add another layer of Green Glue then the outer layer of drywall. It’s not necessary for both layers to be soundproof drywall; the outer one can be normal drywall.

Using all these materials will result in an almost entirely soundproof structure. You can basically repeat this method for ceilings too.

Which is Better, Soundproof Drywall or Insulation?

If I had to pick between soundproof drywall and insulation, I’d go with insulation.

This is simply because it’s a more widely available product, it’s cheaper, and it does a decent job at absorbing sound waves.

Soundproof drywall, in my opinion, is much like soundproof curtains. They’re a great idea but you’re limited by the original material’s density and sound transmission properties.

Gypsum is quite rigid, meaning it transmits sound waves quite well, and it’s also thin. These properties make it ideal for quickly assembling walls, but are not good for soundproofing.

Although it’s got a much higher STC than normal drywall, you’d be better putting your efforts into insulating the wall cavity and installing decoupling methods instead.

This would be a much better use of your time and budget.

Hopefully, this article has covered the advantages of soundproof drywall vs. insulation.

As you can tell, my feelings are that insulation serves a better purpose.

But it’s important to remember that it shouldn’t be used on its own. For best results you want to use a range of different products to cover things like absorption, dampening, isolation, and dissipation.

The best advice I can give is to plan your project properly, including budget, to see which materials would suit you best.